Minnesota’s natural landscape looked very different in the not-so-distant past. Much of the state was once covered in expansive, biologically-diverse prairie. Tall grasses rolled in the wind. Pockets of bright wildflowers and roaming herds of bison dotted the scene. Today, nearly all of that native tallgrass prairie has been lost in the state as managed fires became less frequent and humans converted the fertile soil to agriculture and urban development. Minnesota is now home to a small fraction of the bison that once grazed here. Exploitation by European settlers drove bison to near extinction by the late 1800’s. Fortunately, a small group of conservationists joined efforts to prevent the species from going extinct. Today, while still only a fraction of their historic numbers, there are estimated to be nearly 500,000 bison throughout North America. 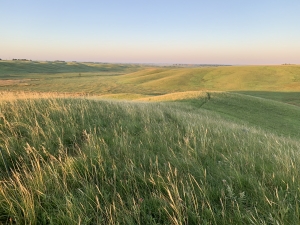 The Minnesota Zoo participates in the Minnesota Bison Conservation Herd, a collaborative effort between various organizations and individuals that strives to maintain healthy and genetically diverse populations of bison. In collaboration with the Minnesota Department of Natural Resources (DNR), and with significant support from the Shakopee Mdewakanton Sioux Community, herds of bison can now be seen at Blue Mounds State Park, Minneopa State Park, Oxbow Park, and the Minnesota Zoo.

Maintaining the health and wellness of these bison herds requires many moving pieces and much expertise. Bison are grazers and can consume a remarkable amount of vegetation in a single day, putting significant pressure on the landscape. Animal and land managers have to ensure that each herd of bison has access to a large enough area with healthy vegetation that can support the animals year-round. As individual bison die-off and new calves are born each year, herd size and composition has to be assessed. Individuals may be moved out of and between herds to maintain the health of the overall group. 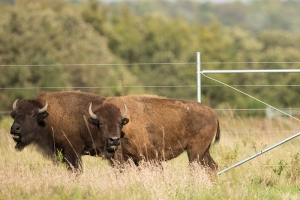 The genetic makeup of the Minnesota Bison Conservation Herd is also of importance. When bison were hunted to near extinction in the 19th century, it significantly reduced genetic diversity and left only a handful of individuals and their genes to repopulate the entire population. Even today, many decades later, the bison currently roaming Minnesota are descended from a small number of individuals. Maintaining genetic diversity is a crucial piece in the conservation of any wild species. A more genetically diverse population is generally more resilient in the face of challenges such as disease outbreaks, and prevents against issues associated with inbreeding. This type of resiliency is crucial for the long-term survival of a species.

Scientists and conservationists at the Minnesota Zoo, Minnesota DNR, and Texas A&M University work together every year to analyze the genetics of the bison herds and make recommendations for the population. Each fall, the bison are gathered so that genetic samples can be taken from new individuals and vaccines and wellness checks administered. Hair samples are sent to the DNA Technologies Core Laboratory at Texas A&M University for analysis. The results are then studied by a handful of individuals, including Tom Ness, Curator at the Minnesota Zoo. 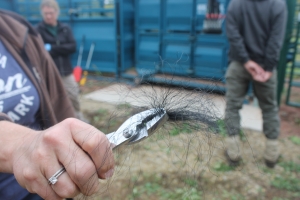 Ness, who has a background in population biology, examines the genetic makeup of the herds and then makes recommendations for management so as to ensure health and genetic diversity.

“During the annual bison management days I work with the DNR and help identify which animals we still need to collect a DNA sample from with the goal of collecting a sample from every individual in the herd,” Ness explains. “The ultimate goal is to help reduce inbreeding in the group and maximize genetic diversity.”

After receiving the genetic results from the collection of hair samples, Ness makes recommendations to the State Parks to help them manage the health and viability of their herds.

“Some individuals will have genetics that are already very well represented within the herd and others are more genetically unique and valuable,” says Ness. “I create a recommendation for the State Parks and identify which calves are genetically important to the population and should stay and which should be transferred.”

Genetics aren’t the only factor taken into consideration, however. “There are also animals that we recommend keeping in the herd because of social structure,” states Ness. At the Minnesota Zoo, for example, the dominant female of the herd acts as a gatekeeper of sorts. The other bison apparently look for her cue before making any group decisions. If she decides to move, the rest of the herd follows. And if she stubbornly decides to stay put, it suddenly makes it a bit more challenging to move the group. Keeping her in the herd helps maintain those established dynamics and often reduces stress for the animals and the keepers who care for them. 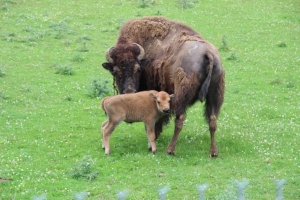 The number of bison grazing throughout Minnesota’s landscape continues to grow. This coming year, Dakota County Parks is joining the Minnesota Bison Conservation Herd and reintroducing a herd at Spring Lake Park Reserve. The presence of bison is a vital step in prairie restoration. Bison graze mainly on grasses and can help increase plant diversity within a prairie, giving flowering plants a chance to grow and compete with the grasses. This in turn helps to stabilize the ecosystem and may increase diversity of other species such as birds and butterflies.

You can learn more about these efforts by visiting the Minnesota Zoo’s bison conservation landing page, and check out this recent blog post for a look into the annual bison management days.