Once numbering tens of millions of animals across the North American prairie landscape, bison were hunted to near extinction during the 19th century until fewer than 1,000 remained.  Small herds were saved and protected in reserves such as Yellowstone National Park and at the Bronx Zoo at the turn of the century.  Since then, the population has multiplied to safe numbers as a result of bison restoration and protection efforts on public lands and in private herds.  However, more must be done to keep this species healthy for years to come. 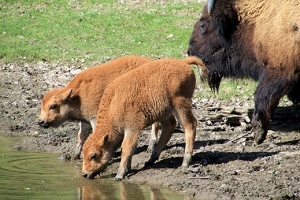 During the remarkable comeback of North America’s largest land mammal, a silent genetic threat was introduced.  Domestic cattle were allowed to interbreed with many of the protected herds, contaminating and changing the character of the American plains bison genome.  This could alter the appearance and adaptability of a species that has existed for thousands of years.  It is estimated that less than one percent of the world’s remaining American plains bison have tested free of cattle genes.

What Are We Doing to Help?

The Minnesota Zoo has collaborated with the Parks and Trails Division of the Minnesota Department of Natural Resources (DNR) to conserve the American plains bison genome in the state of Minnesota. A joint herd of American plains bison that has tested free of cattle genes to date is being managed cooperatively at Blue Mounds State Park (BMSP) and at the Minnesota Zoo. We also worked to successfully return bison to additional Minnesota state parks, such as Minneopa State Park in the fall of 2015.  Minnesota Zoo staff coordinates the genetic testing and pedigree tracking of the bison herd.  All bison calves born at the zoo are released into a Minnesota state park at the yearling age.