Many decades ago, it wouldn’t have been uncommon to be graced with a vista of miles of prairie habitat stretching far into the horizon, with herds of bison grazing among the rustling grasses. Tens of millions of bison once roamed across North America, relying on healthy prairie habitat for their survival. Unfortunately, bison were hunted to near extinction during the 19th century until fewer than 1,000 individuals remained. Over the years, coordinated conservation efforts have saved this remarkable species from extinction and reintroductions in several locations across North America have been successful. 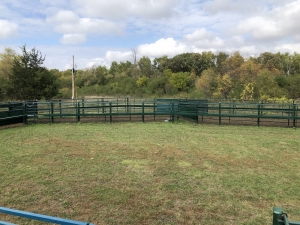 Corrals where bison are temporarily held before their health examination.

The Minnesota Zoo in collaboration with the MN Department of Natural Resources (DNR), and with significant support from the Shakopee Mdewakanton Sioux Community, has worked to reintroduce and manage herds of bison at Blue Mounds State Park and Minneopa State Park. These herds are an important population for the American plains bison. Over the years, cattle have been allowed to breed with bison which has significantly altered the genomic makeup of many wild bison populations today. This could alter the appearance and adaptability of a species that has existed in North America for thousands of years. It is estimated that less than one percent of the world’s remaining American plains bison are free of cattle genes.

It’s a different story for the herds at the Minnesota State Parks, however. The individuals there have largely tested free of any cattle genes, which may prove to be vitally important to the health and conservation of this species. In order to manage and care for these herds, each individual animal must be evaluated- no small feat when working with dozens of wild animals that can easily tip the scale at 1,200+ pounds. 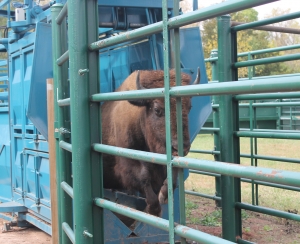 A bison cow is released after a full health examination.

Once each fall, the herds of bison at Blue Mounds and Minneopa are gathered for this annual management event. The earth vibrates perceptibly as bison hooves pound the ground while being guided through temporarily-constructed pathways and pens. Here they wait their turn to be seen by members of the Zoo’s veterinary team and Zoo and DNR staff. Yearling calves, cows, even the breeding bulls- all will be seen and cared for by the close of the day. Each individual animal is guided into a pen and its weight first recorded. Calves at a meager 325 pounds are dwarfed by Teddy, the breeding bull at Minneopa State Park, who weighed in at an impressive 1,645 pounds.

Swiftly and with astounding skill, Zoo and DNR staff collect a sample of tail hair from each bison, administer needed vaccines, and draw a small sample of blood from a handful of the herd. Within minutes, the individual is again released back into the prairie. This is when personality differences are most evident – some burst out of the pen with a speed and ferocity that can take your breath away, while others are gently coaxed out and may even linger long enough for a close-up photo to be taken. 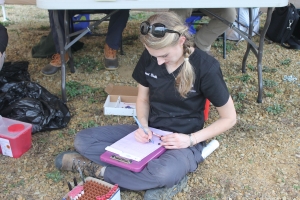 The procedure is quick and precise, but also a critical one for the health of these individuals and the collective herd.

“During the management event we collect tail hair samples for analysis,” explains Tom Ness, Curator of the Farm, Northern Trail & Russia’s Grizzly Coast at the Zoo. “We don’t have the ability to visually ID individual animals so the hair collected helps us determine pedigree and parentage and tests for cattle genes. That information then enables us to look at the genetic makeup of the entire herd, so we can maintain a healthy population and meet our target goals for overwintering herd size.”

There are currently 70 individuals at Blue Mounds State Park and 30 individuals at Minneopa State Park. Each of these herds is at their targeted size which is imperative in assuring that the parks can sustain the bison throughout an unpredictable Minnesota winter. 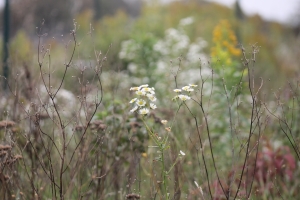 The shadows extend with the sinking afternoon sun and soon the entire herd has been released back onto the prairie. It will likely be another full year before DNR and Zoo staff have the opportunity to work this closely with these herds. It’s certainly a privilege to get such an intimate view of these incredible animals, even if just for a day. Their wildness serves as a reminder of their power and demands caution and respect. They take their wild with them back onto the expansive prairie, where they look as at-home as any animal I’ve seen.

You can learn more about the Minnesota Bison Conservation Herd here. Don’t forget to visit The Minnesota Zoo, Blue Mounds State Park, and Minneopa State Park so you can see these majestic animals in person!