For the Minnesota Zoo’s Conservation Department, the spring and summer field season is an especially busy time. Due to the seasonal variation in wildlife activity, the warmer months are often times when animals are most active and conditions are most conducive research. This coming field season is certainly not short on exciting activity. Here are some updates from the team and a preview of what these hard-working Zoo conservationists have planned:

The Zoo recently hosted the annual Minnesota Bison Conservation Herd’s annual meeting. Researchers and conservationists from a variety of institutions across Minnesota gathered virtually for the opportunity to share updates and plans. The collective herd, which consists of animals at Blue Mounds State Park, Minneopa State Park, Oxbow Park, and the Minnesota Zoo, now consists of over 100 individuals. Read more about how population genetics are studied for the conservation and management of this species. 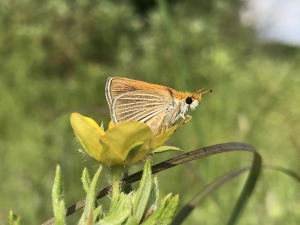 As the weather continues to warm, hundreds of hungry caterpillars housed at the Minnesota Zoo will be awakening from their winter slumber. The Zoo’s Pollinator Conservation Initiative is rearing threatened Dakota skipper and Poweshiek skipperling caterpillars and working with a multitude of partners to release individuals and manage the few wild populations that remain. In addition, the team will be expanding their research efforts this summer to include a new group of insects- Minnesota bumble bees. Bumble bees found on Zoo grounds will be outfitted with very tiny transmitters which will allow researchers to track their movement and better understand dispersal and habitat use. 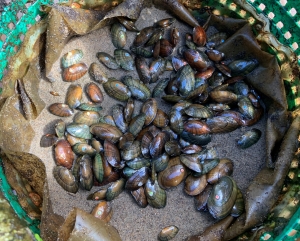 Freshwater mussels reared at the Minnesota Zoo for reintroduction.

Freshwater mussels may not appear to be the most physically active of animals, but there is plenty of activity happening with restoration efforts! The freshwater mussel restoration program is planning to transfer thousands of adult mussels that have been reared at the Zoo to the Minnesota Department of Natural Resources (DNR) for eventual release into local rivers. This past year, Zoo staff within the Conservation and Aquariums divisions have reared nearly 200 walleye that will also be transferred to the DNR. Walleye are an important host fish for many species of mussels and are a critical component to conservation efforts of at-risk mussel species.

The Zoo’s freshwater turtle conservation efforts continue to grow and expand. This past year, dozens of hatchling wood turtles, a threatened species in Minnesota, were raised at the Zoo so as to increase the rate of survival of the individuals and bolster local populations. These very photogenic yearling turtles will be released this summer back into their natural habitats. A few of these turtles will be outfitted with transmitters before their release so that Zoo researchers can study their habitat use and track survival over time. 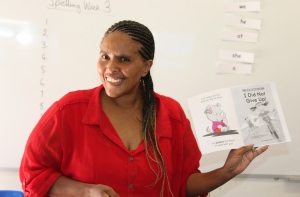 A teacher at the Reading with Rhinos training.

Minnesota isn’t the only place that the Zoo focuses its conservation efforts on! Across the pond, the Black Rhino Conservation Project is busier than ever working to save this critically endangered species from extinction and connect local communities to these remarkable animals. While tracking and monitoring wild rhino populations is a pillar of the project, so is education and community engagement. The Reading with Rhinos campaign was developed with the goal to improve literacy and foster connections between local youth and the neighboring wild rhinos. The campaign just completed their first teacher training workshop this spring.

The newest wildlife conservation program for the Zoo focuses on endangered chinchillas in Chile. In partnership with the Chilean National Zoo (Zoológico Nacional de Chile), the Chilean government and other partners, this program will study the few remaining wild chinchilla populations. The first session of field work just wrapped up with researchers setting up field cameras for monitoring and collecting hair and fecal samples from chinchilla dens in order to better understand genetics and population dynamics.

The Minnesota Zoo is extremely proud of its wildlife conservation efforts, here in Minnesota and around the globe. Stay connected for continued updates from all of these exciting and important programs!