Becky Duchild is clear and to the point when asked why she pursues the work she does. “I love sharks,” she answers. “I think they are incredible animals that have a reputation they don’t deserve.” Duchild has been an aquarist at the Minnesota Zoo for over 19 years. She has dedicated her decades of work to not only fish but Minnesota native reptiles and amphibians as well. If you’re lucky enough to bump into Duchild during your next Zoo visit, be sure to say hi and ask all of your shark-related questions. She’ll likely have the answers!

“I think informing people about sharks is one of the most important parts of my job. Sharks have been on Earth for around 400 million years, since before the dinosaurs, and they currently live in every ocean at every depth. Some can even be found in freshwater,” Duchild explains. 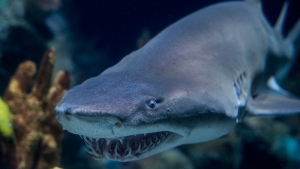 Much of her career has been focused on sand tiger sharks, a vulnerable species that inhabits temperate and tropical waters. As Duchild explains, zoos and aquariums can play a special role in the conservation of this species.

“I have been working with sand tigers my entire 21-year career, even before I came to the Minnesota Zoo. I am quite fond of these animals; they are fun and challenging to work with. They are commonly represented in aquariums and zoos worldwide, but so little is known about them in their native habitats. “

Duchild has been actively involved in the Minnesota Zoo’s participation in a multi-institutional behavioral study aimed at better understanding sand tiger shark breeding behavior in captivity.

“Their reproduction is a particular mystery and one that zoos and aquariums can actively participate in. I am so excited that the Minnesota Zoo is participating in a behavioral study that is starting to give researchers some clues about their breeding behavior,” says Duchild. “Research is beginning to show sand tigers in aquariums need water temperatures and light cycles that mimic the seasons they would be exposed to in the wild to reproduce. This is something we’ve been providing for our sand tiger sharks for years now, and it’s my hope that more aquariums can do this. Hopefully we’ll see a baby sand tiger in an aquarium someday soon!”

While Duchild has a clear love and passion for sharks, when asked what her favorite animal is she has a slightly different answer. “My very favorite animals are in the cephalopod class, which contain octopus, cuttlefish, nautilus, and squid. At the very start of my career, I was able to work with nautilus (a distant cousin to squid and octopus), and I found them to be amazing, mysterious, cool animals.” 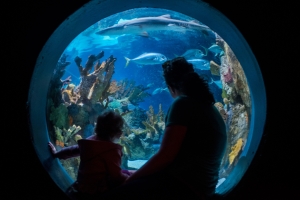 Many people are likely unfamiliar with nautilus but Duchild’s admiration and fascination of the animals is infectious and quick to spark interest in any zoo-goer. “They have been on Earth for over 500 million years! That’s mind blowing to me!” she exclaims. Duchild, an active conservationist, has used her passion and career to educate herself and others on the plight of some of the world’s most endangered species.

“Nautilus are now thought to be in imminent danger of becoming extinct because of human behavior,” she laments. “They are the only cephalopod to retain their external shell, which is highly sought after in the decorative shell market. They are being over-fished solely for their shells, with many of them being sold in the US. I met with a researcher working with countries and people in Southeast Asia to begin to understand the behavior, habitat use, and human influence on nautilus, and I knew that I had to help.”

The Minnesota Zoo is proud to be a world-class organization working to save wildlife across the globe. It is because of talented, driven, passionate staff like Becky Duchild that we can hope to give some of these species a fighting chance.