Building Mussels at the Zoo? An Exercise in Freshwater Conservation.

The Minnesota Zoo has always placed great emphasis on conserving wildlife.  While we’ve been on the forefront of conservation efforts for easily recognizable international species such as the Amur tiger and black rhino, in the last several years the zoo has increased its focus on lesser known species native to Minnesota.

Freshwater mussels play an important role in Minnesota’s aquatic ecosystems.  There are around 50 species native to Minnesota, 5 of which are endangered at the national level.  Mussels are an excellent indicator of the overall health of our lakes and rivers.   As filter feeders they are responsible for processing and removing excess nutrients, bacteria such as E. coli, micro algae, and toxins from our waterways; this also makes them susceptible to pollution such as chemical run-off, silt from dredging, and invasive species like the zebra mussel.

In February of 2015 the Minnesota Zoo began working with the Minnesota Department of Natural Resources with the aim of establishing a strong partnership for native mussel conservation.  Expert malacologists (those who study mollusks) with the DNR’s dedicated Lake City mussel conservation facility visited the zoo to discuss ways for our two organizations to partner up and pool resources to further local mussel conservation efforts.  From that first meeting arose a plan with two primary goals; to use the zoo’s main lake as a site to culture endangered mussels for eventual wild release, and to use the zoo’s public presence and strong conservation experience to increase public awareness about the plight of our native mussels and what people can do to help.  More information on the plight of Minnesota’s mussels can be found by visiting the DNR’s website: http://dnr.state.mn.us/mussels/index.html

The first goal was going to be somewhat experimental, determining whether or not our main lake would support the life and growth of mussels.  To this end, in the spring we began increasing the frequency and scope of the water chemistry testing we do on the lake.  Results were positive, and the zoo’s aquarium and life support department (with assistance from the DNR) began designing and constructing the apparatus that would be used to house and grow our initial species of mussel, the plain pocketbook.  The plain pocketbook, Lampsilis cardium, was chosen as the first species we’d attempt due to its hardy and common nature.  We began ordering equipment and installing our system in May and completed installation in late July.  The system is comprised of pumps that deliver a steady supply of air along the underside of the bridge crossing the main lake.  Attached to the north side of the bridge at the half-way point is an aluminum frame designed to support six 5 gallon buckets and kept afloat in mid water column by 4 marine buoys.  The buckets that sit in the frame contain fine mesh screening to keep the mussels in place, and air supply tubing routed to create a constant up-flow of water to keep the filter feeding animals in a steady supply of nutrient rich water.  We received our first group of around 150 mussels from the DNR (cultured at the Lake City facility) on Tuesday, August 4, and by the end of the week we had already seen noticeable growth.  An early sign of success!

As this project continues to develop we hope to increase the number of species and amount of mussels we’re working with, specifically, working with the 5 endangered species native to Minnesota.  We’ve also begun to increase mussel awareness by including mussels in our master naturalist classes and incorporating our system into our STEM (Science, Technology, Engineering, and Math) programming.  The next time you visit the zoo and cross the main bridge, don’t forget to look down and learn a little bit more about these important animals that call our state home. 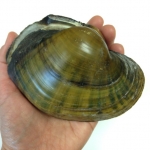 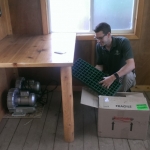 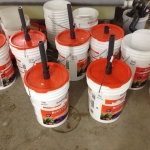