By 9 am on a typical Thursday, many working folks have downed a cup of coffee or two, settled in at their computers, and perhaps sent off a round of emails, maybe even checked off the first item on their to-do list. But for the Animal Health team at the Minnesota Zoo, they may well have administered medication to a headstrong camel, drawn up a care plan for the recovering sea otter, and set off for a sea turtle exam by 9 am on a typical Thursday morning. For this expert staff team of veterinarians and animal health specialists, a “typical” day is likely to look far from typical to the rest of us. 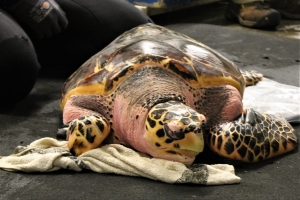 Hawkeye the sea turtle prepares for his health exam.

On this particular morning, Hawkeye the sea turtle was next on the daily schedule for the Animal Health team on duty. You may be familiar with Hawkeye if you’ve seen him cruising around the Tropical Reef exhibit. If so, it’s likely you’ve noticed that he’s a very special turtle indeed. Hawkeye was rescued after being found so tangled in an abandon fishing net that he could no longer swim or eat. In order to save him, his right flippers needed to be amputated. Hawkeye’s injuries from the fishing net entanglement left him unable to survive and thrive in the wild so he was rehabilitated at the Dallas Zoo. Hawkeye has since recovered swimmingly from this incident that nearly took his life, and he can now be seen steadily making the rounds of Minnesota Zoo’s Tropical Reef.

All of the animals at the Minnesota Zoo receive high-quality, personalized care to ensure they remain as healthy as possible. Part of these care plans are routine health exams for the Zoo residents. For Hawkeye, this included a suite of non-invasive, brief tests and examinations performed by the Animal Health team. His exam began by collecting standard measurements of shell length and width as well as weight (currently just topping a healthy 72 pounds!) to make sure there have been no significant changes since his last exam. 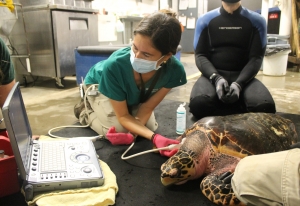 Dr. Tang performs an ultrasound on Hawkeye to check for healthy heart and digestive system.

Next, Dr. Karisa Tang, with assistance from Animal Health Specialist Joshua Vigdal and Zoo Aquarists, took radiographs, which use X-rays to produce images of Hawkeye to check for any possible internal irregularities. In addition, Dr. Tang performed an ultrasound which is an efficient means of checking a turtle’s heart rate and getting a sense for how the digestive tract is functioning. Before performing a visual inspection of the underside of the shell (called the “plastron”), a small sample of blood was drawn, another common component of health screenings for both humans and other animals alike. Since turtles have a hard shell covering and protecting much of their body, Animal Health staff have to be inventive when it comes to getting a complete examination and they use several tools to help piece together the whole puzzle.

After a reasonable amount of careful poking and prodding, and with a few generous flipper-slaps thrown in from the patient, the Animal Health team had completed a full examination of Hawkeye and he was ready to be returned to the reef. But the exam doesn’t officially end there. 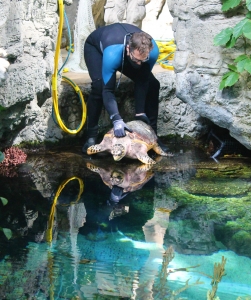 The Animal Health team returned to the lab where they will continue to analyze the images and samples collected so they can give Hawkeye a good bill of health and prescribe any special care that may be needed to further ensure his well-being.
While routine, exams like these are crucial for maintaining the health and well-being of all animals at the Minnesota Zoo. Caring for such a wide-array of species that are often expert at hiding illness or irregularities in their health requires a lot of knowledge and training, something that the Zoo’s Animal Health staff have in abundance. And with nearly 5,000 individual animals that call the Minnesota Zoo home, this talented team is kept plenty busy!

We are excited to be providing a behind-the-scenes glimpse of the work that our amazing Animal Health team performs on a daily basis here at the Minnesota Zoo. Follow us on social media and visit our blog webpage for more engaging stories ahead!