Behind the Scenes: Coral Conservation

Minnesota, being many miles from the nearest ocean coastline, may not be the most likely place to find coral conservation, but at your next visit to the Minnesota Zoo, you may encounter two of the most passionate coral conservationists around.

Josh Moline and Christoph Noetzli are both Aquarists at the Minnesota Zoo, and while they’ve called this land-locked state home for many years, they’re no strangers to the incredible diversity of life that exists in and around our ocean’s coral reefs. And they both have developed a profound appreciation and respect for these remarkable animals and ecosystems. 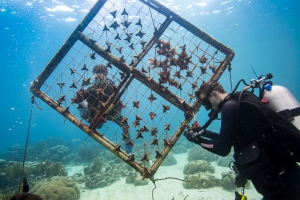 Moline (right) working with restored corals in the floating nursery in Curaçao. Successful colonies were then removed and planted in the wild.

“Corals and coral reefs have so many implications for the health of our planet,” explains Moline. “Starting with something as small and dynamic as the health of a coral has implications not just for the ocean but for our world and economy as a whole. And not only that, but working with corals is really fascinating because each coral is different and has its own characteristics. Each coral has a specific lighting range and flow rate that it prefers. Some corals can’t be located physically next to each other because they’ll fight and sting each other. So working with that in an aquarium is a challenge and also really exciting.”

Noetzli has a very similar fondness and fascination with corals.

“I’ve always loved coral, but taking care of them and learning about them started when I came to the Minnesota Zoo,” Noetzli says. “I quickly became very fascinated. And then the research and advancement of coral breeding really exploded in the past few years which is exciting. Josh [Moline] and I have been really lucky to work with that and see the work firsthand.”

Moline and Noetzli’s direct involvement in coral conservation and research began in 2017, when Noetzli traveled to Curaçao to partake in an annual workshop put on by SECORE International, a leading organization for the conservation of coral reefs. Much of their work, including in Curaçao, centers around developing and implementing methods for large-scale reef restoration. During this annual workshop, scientists and aquarists from around the world work side-by-side, learning from each other and diving in (pun intended) to restoration efforts. Their involvement in these SECORE workshops was funded through the Minnesota Zoo’s Ulysses S. Seal Grant initiative- a program that awards funds to wildlife conservation efforts around the world which are championed by Minnesota Zoo staff.

Moline, who attended the SECORE workshop in 2018, explains a typical day of work:

“The workshop began with about two days of training and then a day or two of orientation dives.” These early dives were necessary so they could familiarize themselves with the environment, as the later dives all took place in the middle of the night. “Everything we did underwater was at night, after sunset, because that’s when coral spawn,” further explains Moline. “You go out and manually collect sperm and egg that are released into the ocean by the coral. You then have to bring that back to the lab and manually make sure the eggs are fertilized.”

In the wild, corals typically release sperm and egg into the surrounding water at around the same time. After that, it’s left up to chance. And the odds of them finding each other, successfully fertilizing, and then settling and surviving to form a colony are extremely low in the wild. With the help of projects like the SECORE initiative, the hope is to give these struggling corals a bit of a headstart. After the larvae are formed in the lab, they are planted in a nearby nursery where they can grow with little to no competition for their first year of life, before being released back into the wild. 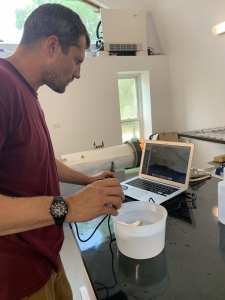 Noetzli checks for settled coral larvae in the lab as part of the SECORE restoration project.

Unfortunately, corals are increasingly needing this type of human-intervention for survival in the wild. Corals are threatened by a suite of factors that are pushing many to the very edge of extinction – global climate change, human coastal development, overfishing, and pollution all included. Scientists estimate that at current rates of warming, we will lose the vast majority of our planet’s corals in the next few decades. In fact, approximately half of the world’s shallow water coral reefs are already gone. If we want to conserve the world’s coral reefs, and protect the incredible biodiversity that relies on them, we need to take action now.

As Moline notes, there are many reasons we all should care about coral conservation.

“Corals are very important to not only oceans but all of humankind. They house incredible amounts of diversity. We often call them ‘the rainforests of the sea.’ They are also really important for the tourism industry and local economies. In addition, coral reefs provide protection for the shoreline and provide natural barrier and wave-break. They also clean up and remove toxins in the oceans.”

Not only are corals foundational to the health of our oceans, global economy and the planet as a whole, as Moline reminds us, “They are also absolutely gorgeous. And really, really cool.”

It’s not too late for us to take collective action and help save the world’s coral reefs. Here are some great ways you can make a positive splash for our planet’s corals: 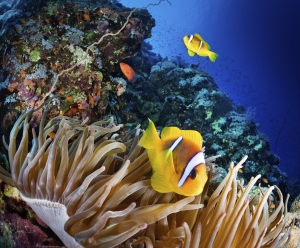 Coral reefs support about 25% of all marine species.

Thank you for supporting the Minnesota Zoo and wildlife conservation efforts across the globe!