Celebrate World Rhino Day with the Minnesota Zoo on Friday, September 22! Come join us at the top of the Tropics Trail from noon-2pm to participate in rhino-themed activities. Help us honor the rangers that risk their lives to protect rhinos! You can post a letter to one of the rangers which will be hand-delivered by our conservation biologist based in Namibia.

Life as a Rhino Ranger 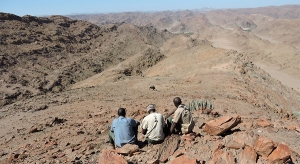 Imagine your job is to protect an endangered species from extinction.  Sounds exciting, right?  Now consider this.  The main threat:  fellow humans armed with a burning desire to return with a rhino horn in hand in exchange for more money than they would otherwise receive in an entire year or more.  You, on the other hand, are armed with a camera, GPS, and basic camping supplies.  Your monthly income is typically just enough to feed your family and a bit extra, depending upon how many rhino you see.  Each month, you say goodbye to your family and, for the next 20 days, hope to remain out of harm’s way while locating and photographing as many rhino as possible.  And the land upon which you patrol is cruel and unforgiving (see photo of ranger team on patrol) with daily temperatures easily reaching 130 degrees (F) and full of wild things such as lions, leopards, hyenas and plenty of spitting cobras. This is what it takes to protect rhino these days…

Yet in north-west Namibia, the Minnesota Zoo and local partners have been privileged to support such a brave group of men known as Rhino Rangers.  Despite the increasing threat of poaching in their backyards, these rangers have risen to the occasion. Each month between 30 – 40 rangers strap on their boots and head out into the wilderness.  And their work has been nothing short of spectacular. Over the past year, rhino sightings have more than doubled and more individual rhinos are being seen each month across one of world’s largest and harshest wilderness areas. Only a few rhinos have been lost.

So as World Rhino Day approaches, we invite you to help us honor these rangers and their brave, selfless work.  To learn more about critically endangered black rhinos and to make a donation to help them, visit http://mnzoo.org/conservation/around-world/desert-black-rhino

We hope to see you at the Zoo on September 22 to help us celebrate World Rhino Day!