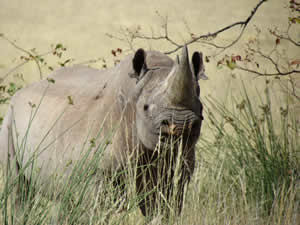 Did you know there are five species of rhino alive today, and all of them need our help now more than ever? Javan, Sumatran, black, greater one-horned, and white rhinos face many threats, including the possibility of extinction. World Rhino Day is an opportunity for our global community to raise awareness and raise our voices in support of rhinos and fight for a better future. Join us as we celebrate these amazing animals and use our collective power to “keep the five alive!”

What are rhinoceros?
There are five species of rhinoceros alive today- the Javan, Sumatran, black, greater one-horned, and white rhinoceros are all members of the family Rhinocerotidae and are closely related to horses and zebras. They are characterized by the one or two horns on their snout and their large size, appearing to be covered in plates of armor. Despite their large size, rhinos are surprisingly agile and can charge at speeds up to 30 mph. Rhinos are some of the planet’s few megaherbivores- plant-eaters that weigh over 2,000 pounds. They are important to the ecosystems they inhabit and help keep grasslands and woodlands healthy for other animals and plants to thrive. In addition, rhinos contribute to economic growth through tourism and are often important to the stability of local communities. 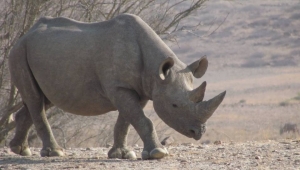 Why are rhinos in trouble?
Rhinos once roamed throughout much of Africa, Asia and Europe. At the beginning of the 20th century there were approximately 500,000 rhinos in the wild. By 1970 the worldwide population had fallen to 70,000. Today, there are thought to be less than 28,000 surviving.

The Javan, Sumatran and black rhinoceros are critically endangered, meaning there is significant risk of these species going extinct within our lifetimes. There are thought to be less than 100 individuals remaining in the wild of both the Javan and Sumatran rhinoceros. Humans have created a demand for rhino parts in the black market which has caused poaching to push these animals to the brink of extinction. Rhino horn is made of keratin, the same as human hair and fingernails, and there is no scientific evidence that they possess significant medicinal properties. Poaching, as well as habitat loss and fragmentation, continue to threaten rhinos today and the need for conservation efforts is great.

What is the Minnesota Zoo doing for rhino conservation?
Africa’s majestic rhinos are under siege from poachers that kill, on average, 3 rhinos per day to feed the black market demand for rhino horn. Namibia supports over one-third of the world’s critically endangered black rhinos, including the last truly wild population that survives outside of protected areas in the rugged northwestern Kunene Region. It is here that the Minnesota Zoo, Save the Rhino Trust, and other partners work with local communities to implement the Rhino Ranger program, Rhino Pride Campaign, and other initiatives to help save the desert black rhino. Initiated in 2011, the Rhino Ranger program trains, equips, and motivates a new generation of local rhino stewards, or “Rhino Rangers”, that are improving rhino security while increasing the value that communities place on keeping rhino alive. The Minnesota Zoo is proud to be a partner on this and other successful long-term efforts in Namibia to save black rhinos.

What can we do to help save rhinos? There are several ways you can help rhinos, even if the nearest wild population is an ocean away.