Anticipation hangs in the air as I face a fluid wall of descending white.  Our volunteer on the project, John Hart, is only steps in front of me, but nearly invisible.  I adjust my backpack, continue to trudge up the slick mountain, and walk forward into oblivion.  It certainly feels like the middle of nowhere—being surrounded by a heavy mist on a drizzling morning in the Mongolian grassland steppes of Hustai National Park.  John turns and catches the expression on my face that clearly asks, “Is this really worth it?  What makes this trip different?”  He knows I already failed in May.

When I pause, I feel the wet slickness of my soaked-through rain jacket, clammy against my skin.  Day after day, we get up and pull on the same cold and wet clothes.  John smiles under his camouflage hat and his whole face lights up, encouraging me.  He works with wolves for a living and knows how sneaky, clever, and elusive they can be.  Despite the weather, we locate an ideal spot and hope that a wolf comes by to find our bait.

The park rangers assigned to work with us hang back by the vehicle, their silence hiding uncertainty.  They were assigned to our team because they are the best wildlife trackers.  They are also herders.  Herders usually shoot wolves on sight, scared that the predators will attack their livestock.  Wolves also kill Asian wild horse foals; “takhi” in Mongolian and the pride of Hustai National Park.  And now this woman in a floppy drenched raincoat wants to study them?

The rangers are extremely protective of their takhi.  Asian wild horses were reintroduced to Hustai in the 1990’s from a breeding program and they take the recovery seriously.  We are proud to be working with them because dozens of the Asian wild horses living the park are descendants of a Minnesota Zoo stallion.  Minnesota Zoo, Smithsonian Conservation Biology Institute, and Hustai biologists are collaborating on research to understand why the harems (herds) don’t expand to use all of the available habitat in the park.  Wolves might be affecting the horses’ movements.  So here I sit, in the rain and covered in mud, trying to catch a wolf.

Flash forward a couple of days that all blend into one with continuous grey drizzle.  Stop.  “Do you hear that?” John whispers under his breath.  I stop and try to control my heavy breathing from running up the slope.  A howl pierces the mist.  We have a wolf!

During an August-September trip to Hustai National Park, our team successfully deployed GPS-tracking collars on three adult wolves.  I can monitor the wolves’ movements from my computer and learn how they travel in relationship to the 15 Asian wild horses we have also collared.  The rangers on the ground are now taking interest and ownership in their collared wolves.  Every morning before work, they congregate at the only spot in the park that receives cell signal for internet, a computer is dragged out, and they check the current wolf locations.  Then with gusto (and a bit of friendly quarrelling), everyone guesses tomorrow’s movements.  What a way to start the day with a smile!

Dr. Kate Jenks, Conservation Biologist at the Minnesota Zoo, just returned from Mongolia where she led research to help save the endangered Asian wild horse (also known as Takhi, or Przewalski’s horse), in partnership with Hustai Nuruu National Park, the Smithsonian Conservation Biology Institute, the Wildlife Science and Conservation Center of Mongolia, and the Naturmuseum Senckenberg. Once considered “extinct in the wild,” these horses were reintroduced into Mongolia from a captive breeding program. The Minnesota Zoo currently coordinates the North American zoo breeding program, the Asian Wild Horse Species Survival Plan. 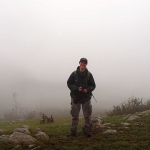 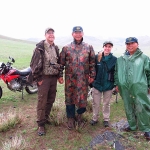 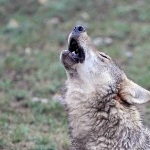 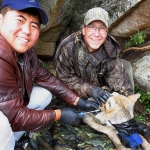 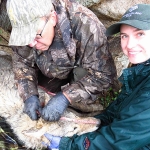 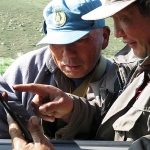