We at the Minnesota Zoo are howling with excitement and pride over Wolf Awareness Week! Join us this year from October 17-23 as we recognize and celebrate one of the world’s most charismatic and important predator species. 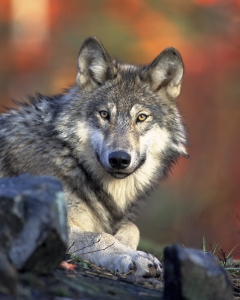 Canis lupus
The wolf, also known as the gray/grey and timber wolf, is the largest wild member of the dog family, native to Eurasia and North America. Males average 110 pounds and females up to 90 pounds. (The heaviest recorded wolf in Yellowstone National Park weighed in at 148 pounds!) Wolves are highly social animals and typically live in packs. Pack size varies due to abundance and size of prey but the average pack in Yellowstone National Park is 10 individuals. These complex social structures function very much like a family, with individuals having unique personality traits and roles that serve the group. Wolves are top predators and have perfected group hunting. Because of their cooperative and social nature within a pack, wolves can often take down large prey that other predators cannot- such as bison and elk. They can also run at up to 35 miles per hour and their sense of smell is estimated to be thousands of times better than humans’. But the social nature of wolves is beneficial in other ways too. Research in Yellowstone has shown that wolf packs benefit greatly from cooperative care of offspring, defense of territory, and even caring for the elderly and sick among them.

Wolves are incredibly important players within the ecosystems they inhabit. Wolves are very successful predators and help keep the number of prey, like grazing deer, elk, and bison, under a threshold. This helps support plant and insect communities that may otherwise be devastated by overgrazing herbivores. In addition, when wolves make a kill, many others benefit. Studies have shown that if an elk is killed, for example, ravens, magpies, coyotes, eagles, and countless invertebrates will feast on the remains after the wolves have had their fill. The decomposing remains also return vital nutrients to the soil.

Wolf packs are highly territorial and not infrequently get in disputes with neighboring packs that can lead to death. Interestingly, in Yellowstone National Park, females of a pack have been reported to kill the ranking alpha female within their own pack and subsequently raising her pups with their own. The structure and dynamics within each wolf “family” are indeed complex and fascinating. Wolves communicate with neighboring packs through howling and scent-marking. Sixty five percent of the collared wolves in Yellowstone are ultimately killed by rival packs. 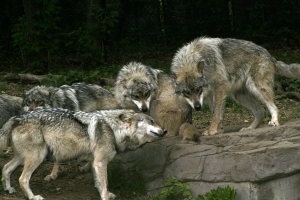 On the Hunt: A History of Persecution in North America
Approximately 12,000 years ago thousands of wolves crossed from Asia into North America over the Bering Strait. They then thrived and became one of the most dominant predators across much of North America. It is estimated that as many as 2 million wolves once roamed freely across the continent. Unfortunately, wolves came to be seen as a public threat and nuisance and federal extermination programs were put in place. Hundreds of thousands of wolves were hunted by humans and their populations brought to a near breaking point. By 1960, the once populous grey wolf was essentially extinct across its range- only 300 wolves remained in the lower 48 states in small areas of Minnesota and Michigan.

The Long Road to Recovery
In 1974, the monumental decision was made to add grey wolves to the Endangered Species Act. Due to the protections now afforded these magnificent and struggling animals, they were able to stage a slow and painstaking recovery. The first wild pack of grey wolves to reestablish territory crossed the border from Canada into Glacier National Park and became known as the “Magic Pack.” It was around this time that public opinions of wolves began shifting. Once seen as a threat and nuisance, the public was developing a newfound fascination and respect for these animals- a sentiment that continues to this day.

Perhaps the most well known reintroduction and recovery stories of a predator in the world is the story of wolves in Yellowstone National Park. In 1975, the long process to restore wolves in Yellowstone began. After much planning and a record number of public comments submitted, 31 grey wolves from Canada were brought to Yellowstone for release in 1995. The initial release was such a success that future planned reintroductions were not needed. It is now estimated that in the Greater Yellowstone Area, over 500 wolves reside. Wolf populations in Montana, Idaho and Wyoming have since been removed from the Endangered Species List. Today, millions of visitors every year from around the globe travel to Yellowstone National Park to catch a glimpse of these elusive and captivating animals.

Minnesota is the only of the lower 48 states to have always held a viable grey wolf population. At the time of federal listing in 1974, it was estimated that there were as few as 350 wolves in the state. Wolves are currently listed as “Threatened” in Minnesota and in 2018 there were estimated to be about 2,600 wolves in the state. Despite a wide array of attitudes towards wolves today, the majority of Minnesotans agree that maintaining a wolf population in the state is important. 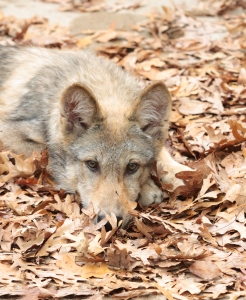 Wolves and Humans
With the return of wolf populations throughout parts of North America, many people are left wondering, “Are wolves dangerous to people?” The short answer is no. Wolves typically do all they can to avoid people. Wolf attacks on humans in North America are very rare. It is a fact, however, that when wild animals become habituated to humans they pose a greater threat. There are ways you can protect both yourself and wild wolves.

Like any large predator, wolves are physically able to harm or kill people. You should never approach a wolf or encourage them to come near you. They may look similar to your household companion but they do NOT behave the same! When outdoors hiking or camping, or if you live in an area where wolves are present, keep your area clean and void of food or waste. Never leave unsecured garbage outside. Keep a constant eye on your pets and other animals and ensure they don’t roam from sight. If you encounter a wolf, don’t turn and run. Retreat slowly while facing the wolf and act aggressive by clapping your hands and yelling. And remember, it is for your safety and the well-being of wolves to always keep your distance and not try to interact with them. Help keep wolves truly wild!

Few animals capture the feeling and experience of wilderness like wolves. If you’ve ever been lucky enough to hear a wolf howl in the darkness, you know how life-changing an encounter can be. We are fortunate to be living alongside these majestic animals once again.