Why Did the Turtle Cross the Road??

Bird song once again fills the treetops, the grass is greening, and turtles are emerging. It’s springtime in Minnesota! Each year, as lakes, rivers, and ponds warm, aquatic life takes its cue and begins to awaken. In Minnesota, turtles spend their winters in a hibernation of sorts, waiting out the cold buried deep in the sand and muck. As they awaken with the warming temperatures and lengthening daylight, they emerge with a strong drive to find food, and likely a mate.

Throughout spring and early summer, you may start noticing more turtles on and along roadways throughout the state.

“The peak season for turtle movement is typically mid-May through June. When turtles awaken in the spring they may find that a lot has changed since last fall. Hydrology changes can alter their landscape and cause a turtle to seek new habitat,” explains Tricia Markle, Conservation Biologist with the Minnesota Zoo.

Turtles often move between bodies of water in search of other turtles, as well. They are opportunistic and will often mate throughout the entire summer season when they encounter each other. 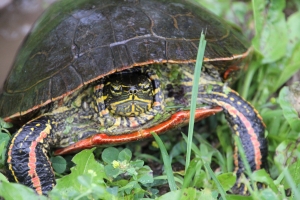 Unfortunately for turtles, finding new habitat and new turtles often involves encountering a road along the way. And turtles aren’t exactly know for their speed (see well-known fable The Tortoise and the Hare). This means that many are at-risk of deadly collisions with vehicles.

Researchers at the Minnesota Zoo, in partnership with the Minnesota Department of Transportation, have been studying road mortality and ways to mitigate this risk for several years. Their results, while preliminary, are sobering.

“We are finding approximately 700 dead turtles each year from vehicle collisions, and that’s just on the short segments of 30 or so roads that we are studying. You can imagine how many turtles we’re losing across all the roadways throughout the entire state,” says Markle. “Turtles are moving from just about every river and our 10,000 lakes. Many of them will have to cross a road.”

But this team of researchers is hopeful that mitigation measures could save many of Minnesota’s turtles. They’ve installed fencing along several roads that appears to be quite successful in keeping turtles away from traffic. Culverts and tunnels underneath roadways act as safe passageways for turtles and other animals that may move between bodies of water. In addition, signage alerting drivers to slow down and be on the lookout for turtles crossing the road during the peak season may help reduce mortality. “Our preliminary results show a 63-80% lower mortality rate at sites with roadside fencing,” notes Markle. Promising results indeed!

Turtles today face many threats, including road mortality, habitat loss, climate change, and predation. So what can you do to help Minnesota’s freshwater turtles?

“Be conscious when around turtle habitats, like bodies of water. Don’t pollute as trash can lure predators, such as raccoons, to the area. Help keep their habitats clean by reducing or eliminating your use of pesticides and fertilizers. And beware of turtles crossing roadways. If it is safe to do, you may help a turtle cross safely by moving them in the direction they are headed,” explains Markle.

For more information on how to safely help a turtle cross a road, check out this instructional video.