What Goes Up, Must Come Down…

Paper lantern and balloon releases are often seen as a fun and beautiful way to celebrate a special occasion. While these traditions may still fly high in many areas and cultures, they are not without significant potential consequences to the environment. As Sir Isaac Newton once famously said, “What goes up, must come down.”

Paper lanterns, even biodegradable ones, pose serious threats to wildlife and livestock, and even humans, when released into the sky. The metal frames that hold most lanterns together do not readily decompose and can maim or kill animals, as well as litter areas where they eventually land. In addition, the risk of sending up an active flame can potentially start fires or harm wildlife. It’s impossible to predict where exactly they will land and even a weak flame or hot lantern can ignite a fire in a tree, among dry grass, or a livestock field or barn. On several documented cases, released paper lanterns have caused fires that resulted in significant property damage and loss of animal life. It’s also important to note that in many cities and states, releasing paper lanterns is illegal, including in Minnesota. 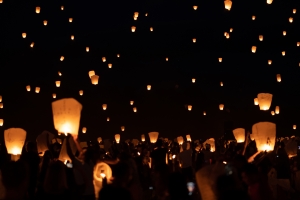 Lantern releases, while a beautiful display, are a fire hazard and pose threats to wildlife.

It might be hard to imagine a birthday party or celebratory gathering without a floating bunch of colorful balloons! And while balloons are certainly a fun way to commemorate an occasion, they can be unintentionally damaging to the environment as well. All balloons that are released, whether by accident or not, will eventually make their way back to Earth as pieces of litter- litter that is often mistaken by wildlife for food. Sea turtles, birds, dolphins, fish, and whales have all been reported to have balloons found inside their stomachs. Even small fragments of balloon and the strings attached can cause death to unknowing wildlife. A floating balloon can also travel many miles before getting caught in a tree and polluting even the most pristine of places. Balloons have caused enough pollution and concern for wildlife that some states and cities have banned the release of balloons for non-scientific purposes. And be wary of balloons labeled “biodegradable” as they may still take up to 6 years or more to fully break down; plenty of time for a hungry critter to stumble upon! 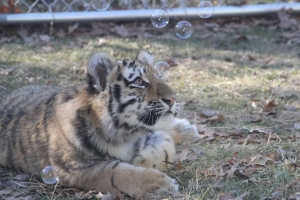 Try blowing balloons at your next gathering as a safe and fun alternative!

While balloons and lanterns are fun and often seemingly harmless additions to your celebration, you may consider more environmentally-friendly alternatives. Instead of releasing paper lanterns or balloons at your next gathering or celebration, try blowing bubbles or even scattering or releasing small amounts of native wildflowers to mark your occasion. Anchored flags, streamers and garden spinners are great options to add some color and fun. And if you are bringing balloons to the party, make sure they are secured and kept indoors where the risk of them floating away remains very minimal. As always, just be sure to clean up thoroughly and leave the space in better condition than you found it!

Thank you for taking action on behalf of our shared planet and the many animals that call it home!