What do turtles do in the winter? 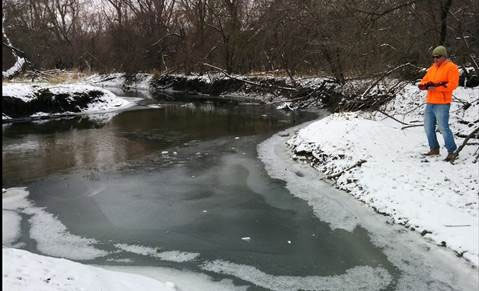 You may be familiar with turtles swimming among lily pads and basking on logs in the summer months, but where do they go when the weather turn cold? In Minnesota winters, freshwater turtles retreat underwater where temperatures remain more stable and most importantly above freezing. Most turtles are relatively inactive buried in mud at the bottom of lakes and rivers, although some are known to move around a little under the ice.

So how does an air-breathing turtle remain under water and ice for several months? Well… it breathes through its bum. Technically called “cloacal respiration”, the same opening used to release waste products and eggs also has another purpose. Flush with blood vessels, the cloaca permits the exchange of gas (oxygen in and carbon dioxide out) as cool, oxygenated water moves across this area.

As turtles are ectotherms (also known as cold-blooded), their body temperature matches that of the environment. A cold, stationary turtle has low energetic needs, and the small amount of oxygen they draw out of the water is often enough to get by until spring. If oxygen levels become depleted, turtles have the option of switching to anaerobic respiration (metabolizing without oxygen). However, this comes with a buildup of lactic acid so that when they emerge in the spring, they are essentially one giant muscle cramp. As such, these turtles are desperate to bask in the sun after a long winter to ramp up their metabolism and eliminate acid by-products.

For MN Zoo field conservation staff, turtle tracking doesn’t end when the temperature drops. As turtles spend roughly half their lives in these underwater winter retreats, understanding their overwintering needs is an important part of their conservation. Using a tiny radio transmitter attached to the turtle’s shell, researchers can track where they are in all seasons. We are finding that some turtles return to the same sites year after year, whereas others do not. Gathering more information about turtle habitat needs (in all seasons) can help to more effectively manage populations that are at risk.