Watch Out for Turtles on Roadways this Spring!

Why did the turtle cross the road? Well, turtles cross roads for a number of reasons, including searching for mates and moving between summer foraging and overwintering sites. Many of the turtles traveling in May and June, however, are looking for suitable nesting sites. Unfortunately, a turtle’s shell, which works great as predator defense, does little to protect it from automobile strikes. In fact, road mortality is among the biggest threats to our freshwater turtles and is contributing to declines in the populations of many Minnesota species. 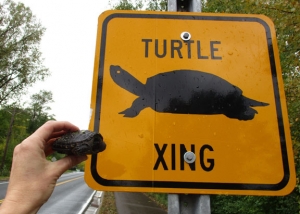 Turtles are slow to cross roads, and the “tuck into the shell” strategy makes it hard for drivers to decipher between turtles and debris on the road. Populations of turtles also may be more impacted by road mortality than many other animals, as turtles do not reach maturity until their teens and natural survival of eggs and young is very low. As such, it takes a long time for populations to rebuild, and the loss of even a handful of adult turtles can be catastrophic at some sites.

So how do we help? If you see a turtle on the road, and ONLY if it is safe to do so, you can pick it up and carry it across the road. This is a great video showing how to safely move turtles. Smaller turtles may be picked up around the middle of their shells. Snapping turtles may be lifted at the very back of their shells and “wheelbarrowed” across the road, or you may slide them across the road with a car mat underneath. Never pick-up or drag a turtle by its tail. Also, be sure to move turtles in the direction they are heading. Injured turtles may be taken to your nearest permitted wildlife rehabilitator.

You can also contact state and local agencies to encourage road infrastructure, such as wildlife underpasses, that helps turtles move safely under roadways. Sightings of turtles on roads can be reported to HerpMapper to help us identify problem sites and target areas for mitigation.

Through a new field research initiative, the Minnesota Zoo is actively working to reduce turtle road mortality. In partnership with MnDOT and multiple counties, we are testing the effectiveness of different strategies for keeping turtles off roads such as roadside fencing. We also are alerting drivers to crossing hotspots with seasonal warning signs and monitoring culverts to better understand the kinds of underpasses that turtles may be willing to use.

Road ecology is becoming an important area of study to make our roads work better for both transportation and wildlife. As turtles on roads can pose a hazard to people by causing drivers to swerve, efforts to keep wildlife off Minnesota’s roads are a win-win!