Waking Up Some Real “Sleeping Beauties” 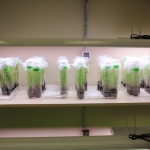 Did you know that the Minnesota Zoo’s Conservation Department is working hard behind the scenes to help save some of Minnesota’s (and the world’s!) most endangered butterflies?   Partnering with many agencies, our Prairie Butterfly Conservation Program has recently been focusing our attention on one species in particular: the Dakota skipper, Hesperia dacotae. In late May, we began waking up our Dakota skippers from their winter slumber

Dakota skippers are listed as an Endangered Species by the state of Minnesota, and were recently proposed as Threatened nationally.  Last summer, Butterfly Conservation Biologist, Dr. Erik Runquist traveled to South Dakota to collect a limited number of Dakota skipper eggs to rear at the Minnesota Zoo. These soon hatched into caterpillars and grew until they began hibernating (as caterpillars) last fall in a cooled incubator. 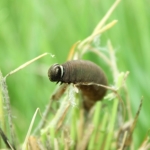 Unlike butterflies like monarchs that migrate to warmer weather during winter months, this impressive Midwest insect overwinters as a caterpillar buried under snow in their native prairie habitat. Our Dakota Skipper caterpillars have been overwintering in a chilled incubator since last September to re-create what they would experience in the wild.

What does it take wake a caterpillar? Our Dakota skippers are gently transitioned to a warmer moist habitat. Heat is their main trigger to tell them it’s time to start eating and growing. Once they start moving around, the first thing our caterpillars did was to build a protective shelter. Using silk they secrete from glands in their mouth, they weave a little ‘tent’ from blades of grass. Only after their shelter is finished do they start to feed on the grasses around them. In just the first week after waking from their hibernation, they’ve more than quadrupled in weight! 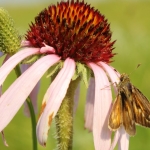 In the next few weeks, our Dakota skipper caterpillars will metamorphose into chrysalids. Two weeks from then they will become adult butterflies, probably in late June. The purpose of this program is to create an insurance population of Dakota skippers in case their numbers continue to decrease in the wild. Continue to look for updates on the Dakota skipper breeding program. Learn what you can do to help butterflies and other pollinators in your backyard here.

Learn more about our work and funding here.