Threatened Wood Turtles Released Back Into the Wild

The Minnesota Zoo, in partnership with the Minnesota DNR, has been working diligently behind the scenes for the past year on a new and critical aspect of our turtle conservation program. And the hard work has certainly paid off! This past June, 13 one-year-old wood turtles, a state threatened species, were released back into the wild with the goal of helping Minnesota’s turtles thrive and survive well into the future. 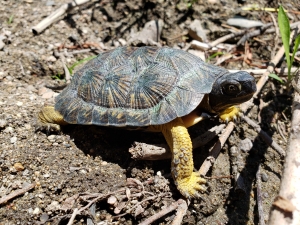 A one-year-old wood turtle released back into the wild.

Wood turtles are a riverine species, overwintering in river bottoms and foraging for food in fields and forests throughout the summer. Unfortunately, populations in southern Minnesota are declining, likely due to a suite of factors that includes habitat loss, pollution, and nest predation. Major flooding events, projected to worsen with climate change, also threaten nesting sites and the survival of recently hatched turtles.

The Minnesota Zoo’s freshwater turtle conservation program works in partnership with other state agencies to better understand the threats that Minnesota’s turtles face today, and ways we can mitigate those risks. Turtle eggs and hatchlings are very vulnerable to predators including raccoons, skunks, and crows. In addition, some nests are at high risk of being destroyed due to flooding depending on their location. Raising turtles at the Zoo for their first year increases survival and ultimately helps sustain wild populations while managers work to address long-term threats. Researchers at the Zoo are also studying road mortality and tracking turtles using GPS transmitters to learn about habitat use and nesting behavior.

Last summer, over a dozen wood turtle eggs were brought to the Zoo to incubate. 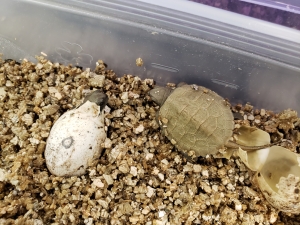 Two months later, and with much effort given to maintaining appropriate temperature and humidity, hatchling wood turtles emerged. The subsequent months involved much care and attention, adjusting their diets and enlarging their habitats to keep up with their rapid growth. By June of this year, they had finally reached a size at which where their chances of surviving in the wild had significantly increased. 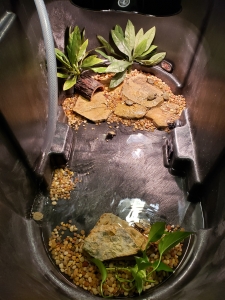 And so, wishing them luck and marveling at their willingness to literally ‘jump right in,’ the yearling wood turtles were released along the shores of the very river where, a year prior, their mothers had emerged and selected a nesting site to lay their eggs. As we watched them begin to eat algae and chase minnows among the rippling water, they certainly seemed right at home.

It is important to note that head-starting turtles requires special permitting and is not legal for general members of the public. If you find recently hatched turtles please enjoy them from a safe distance and do not collect or disturb them. Check out our freshwater turtle conservation page for ways you can help and to read more about this amazing work!

Your support will help ensure that projects like this will continue to work towards a future where wildlife thrives in Minnesota and beyond. Please donate to the Minnesota Zoo Foundation today. Thank you!