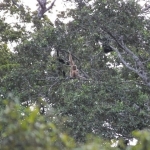 The Minnesota Zoo is well known for its 485 acre facility in Apple Valley, Minnesota. However, people may be less familiar with the amazing work the Zoo does outside of Minnesota. The Zoo’s Conservation Advisory Team and the Minnesota Zoo Foundation have been sending Zoo staff around the world for years with the Ulysses S. Seal Conservation Grant. This grant allows staff to help support conservation projects they are personally passionate about and even participate hands-on in the research, if possible. From Hyacinth macaws to endangered sea turtles, the Minnesota Zoo has sent staff to 24 different countries on 58 grant projects and is excited to continue this great extension of the conservation work being done here at the Zoo itself. Overall, the grant has provided over $365,000 of critically-needed funds to over 120 unique conservation programs in 47 countries around the world. 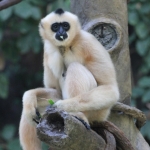 Surely you’ve heard of the great apes – chimpanzees, gorillas, orangutans, and bonobos.  But do you know about the small apes? This group of animals includes fifteen species of gibbons and the closely related “siamang”.  You can easily tell these primates are apes, not monkeys, because they don’t have tails!  Gibbons and siamangs are smaller in size than their great ape relatives and usually live in small family groups, high up in the trees of southeast Asia.  They swing from branch to branch and make fantastic vocalizations to advertise their territory.  Maybe you’ve heard white-cheeked gibbons sing a duet at the Minnesota Zoo! The Zoo has exhibited white-cheeked gibbons since it opened in 1978 and has produced ten infants. 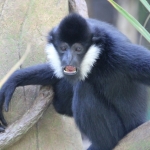 Like the great apes, all gibbons are highly endangered in the wild.  The white-cheeked gibbons on our Tropics Trail are considered “critically endangered” because their wild populations may have declined more than 80% in just 45 years.  In their native range of Laos, Viet Nam, and southern China, these gibbons have been threatened by hunting and habitat loss.

Despite their imperiled status, very little is known about wild white-cheeked gibbons.  So we decided to champion a project for this species through the Zoo’s Ulysses S. Seal Conservation Grant Program.  We’re proud to have supported Project Anoulak’s surveys of white-cheeked gibbons in Laos. 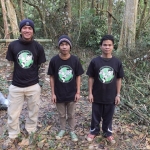 Understanding which areas are strongholds for critically endangered species is a critical step toward saving them.  But how do you count a species, like white-cheeked gibbons, that stays at the tops of very high trees in the middle of a rainforest?  They may be hard to spot, but fortunately, gibbons are easy to hear!  Dr. Camille Coudrat and her team from Project Anoulak went out every morning to listening stations and collected data on the locations of vocalizing gibbons in the Annamite mountains of Laos.  From these data, they were able to estimate the density of white-cheeked gibbons living in the area. Recently, we received great news from Dr. Coudrat – it appears that her study area has an average of about 2 gibbon groups per square kilometer (~7 groups/mi2), which is really high.  This means that the area may harbor one of the largest remaining populations of white-cheeked gibbons! 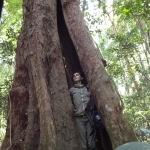 In the next phase of her research, Dr. Coudrat will be using the gibbons’ species-specific vocalizations to determine whether the species at her site is the Northern or the Southern white-cheeked gibbon.  This will have considerable importance for global conservation planning for white-cheeked gibbons.