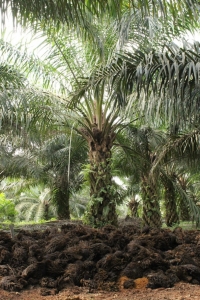 “What can I do to help wild tigers, besides giving money?”  It’s a question I hear often.  For people living in Western countries, the threats facing tigers can sometimes seem so distant.  But many want to help in whatever way they can.  I find that people are often surprised to learn that their everyday shopping habits can impact tigers, and that as consumers we have the power to help.

Where Malayan and Sumatran tigers live, agricultural expansion is dominated by oil palm plantations.  Though relatively large tracts of tiger habitat remain in some areas, some native forests are being replaced.  The palm oil produced here is used in all sorts of food and personal care products around the world.

I’ve read a lot about this issue and I’ve seen many pictures.  But viewing the plantations and seeing the forest conversion in person is a bit overwhelming.  The scale of it is massive.  In a sense, it reminds me of driving for hours through the corn and soybean fields of the Midwestern US, where native prairie once reigned.

Around the world, agriculture occupies about 38% of the land.  Much of the arable land in my home region was converted to agriculture before I was even born.  In my lifetime, significant expansions have occurred in the tropics, to provide for a growing global population.  This worries many people because tropical forests are home to an estimated half of all terrestrial life on Earth and provide incredibly valuable ecological services (such as clean water for people). Finding a way to feed 10 billion people, have a healthy environment, and sustain critical wildlife habitat may be one of the biggest challenges of this century.

As native forests are converted to agriculture, wide-ranging animals have less space to roam and sometimes end up leaving protected areas to move between fragmented forests and/or to find food.  Where I traveled in Malaysia and Indonesia (the world’s top palm oil producing countries), this has resulted in serious human-elephant and/or human-tiger conflicts. 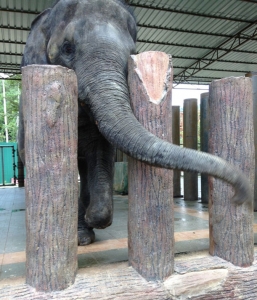 As we pass from the oil palm plantations into the forest reserve near Endau-Rompin National Park, there is a guard at a lookout station.  He is there to watch for elephants.  Nearby is an air cannon.  When deployed, the booming sound scares away elephants, or at least the guard hopes it does.

The Asian elephant is an endangered species and is afforded protections under the law.  But elephants can wreak havoc on crops, disrupting peoples’ livelihoods and leaving them with negative attitudes toward wildlife and protected areas.  Listening to and working with communities to reduce conflict with elephants is important for both people and elephants.

Near the park, we visited a village that has had frequent conflict with elephants.  WCS is working with villagers here and around the region to find solutions, such as building watchtowers with alarm systems that are triggered when elephants run into a metal wire that surrounds the agricultural fields.  The sound itself doesn’t scare the elephants away; rather it is meant to alert people so they can use other means to repel the elephants.  Elephants adapt quickly, so finding new ways to drive elephants away from agricultural lands and toward the forest is a constant challenge.

The following week, we visited areas in the Leuser ecosystem of northern Sumatra where small fragments of unprotected forest are becoming isolated in a sea of oil palm trees.  Tigers travel between these forests, seeking the prey species that seem to thrive in these degraded areas, and coming into conflict with villagers.

Legal land conversion is happening here, with forests being actively cleared by villagers and oil palm companies.  Tiger pugmarks (paw prints) have been recently found next to a company vehicle.  The tracks of wild pigs, a favorite tiger prey species, dot the dirt road.  A villager tells us that he observed a skinny tiger at close distance while on his motorbike a couple months ago.  Several cattle, each worth around a thousand dollars, were taken by tigers several years ago.  But a tiger-proof livestock enclosure, built in 2012, has since protected the cattle, reducing human-tiger conflict.  The small remaining forest will likely be cleared in the next few years, and the tiger(s) using this area may have to find new paths or a different home.  Finding a way for tigers and people to coexist and thrive in this landscape is challenging, to say the least.  But working toward effective solutions will benefit both.

You can help tigers by supporting the Tiger Conservation Campaign and by shopping responsibly with a Sustainable Palm Oil Shopping App.  Learn more: 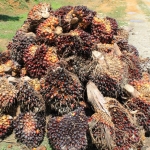 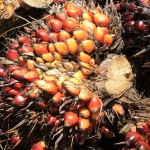 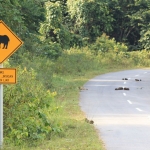 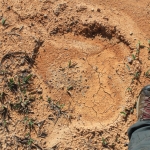 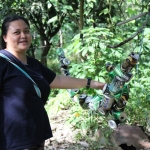 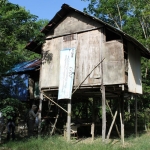 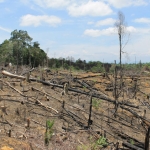 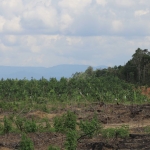 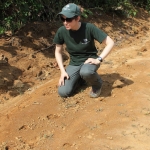 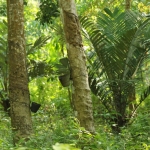 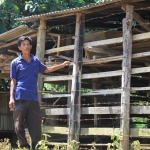