The Story of ‘Sota’ – Minnesota’s namesake rhino in Namibia 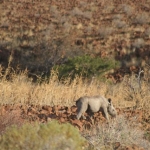 Jeff Muntifering is a Conservation Biologist for the Minnesota Zoo.  He leads the Zoo’s efforts in Namibia to save critically endangered black rhinos.  Learn more about this important work at http://mnzoo.org/conservation/around-world/desert-black-rhino/.

Recently, our partners at Save the Rhino Trust in Namibia spotted “Sota”, the Minnesota Zoo’s namesake wild black rhino in Namibia.  He is now nearly 5 years old and doing exceptionally well on his own, especially since his first 2 years of independence from his mom was one of the worst droughts in decades!  Here’s the story of how “Sota” got his name.

It began as just another ‘day at the office’.  We crawled out of bed before dawn, stoked the fire for coffee, and broke camp before sunrise.  We were on a rhino patrol in the Omutati Mountains, one of the most remote and rugged places left in Namibia, if not Africa.  By 9:00 A.M. my small thermometer read 101 degrees F.  It was really hot and the wind felt like someone was blowing your face with a hairdryer.  Even our donkeys, which we all rode to help cover more ground and carry more weight, were panting and clearly wishing they were anywhere but this unforgiving place.  But we had a mission and we pressed on 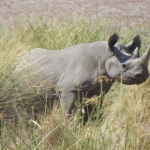 through the heat and headaches.  My companions were locals from the surrounding villages who worked with a small, yet successful conservation organization, Save the Rhino Trust.  They had learned to track animals as young boys and now they used this skill to help feed their families and send their kids to school by finding and protecting rhinos.  They are so good at their job, they sometimes find as many as 10 rhinos in a day.  But today we had a special mission.

We were looking for a female rhino named “Sharon.”  By our calculations, she was due to have a new baby any day now.  We wanted to make sure that both mom and baby were OK.  Just before sunset, our team’s captain, Mannetjie Ganaseb, spotted some fresh tracks.  Next to the large tracks, which look somewhat like giant 4-leaf clovers, were two tiny little ones.  Our spirits sprang into action and within a few minutes we found her feeding peacefully on some small bushes.  And there standing close to Mom was the tiny baby.  Mannatjie quietly whispered, “do you see, it’s a boy!”  His voice was full of excitement, like he was seeing this for the first time, although he had probably seen hundreds of baby rhino during the 25 years he has patrolled these mountains.  His expert eyes next uncovered that the calf was probably about 1 month old, since his front horn was just beginning to grow.  Finally he turned to me and said, “now we must give him a name”.  We always try to give the baby a name that starts with the same first letter as their mom’s name to help us remember who is related to whom.  Since this baby’s mother was named Sharon, we would try to find a suitable name that starts with ‘S’.  Often, the trackers will name the rhino after a famous chief or 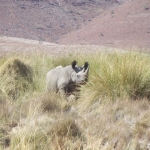 headman, since having a rhino named after you is a sign of respect.  This time, I noticed Mannetjie was focused on my Minnesota Zoo logo embroidered on my field shirt.  After some further discussion with the other trackers in their ancient click language, Damara-Nama, Mannatejie smiled and said they had made their decision.  “This rhino would be named ‘Sota’ after the place Jeff comes from.”

So on the 24th of October 2009, Minnesota inherited a namesake on the other end of the world.  “Sota” would be a symbol of respect and thanks from Namibia to the Minnesota Zoo and Minnesotans for their commitment to help save one of the world’s most endangered and truly majestic wild animals.