None of the researchers here in Endau-Rompin have ever actually observed a wild tiger.  The Orang Asli (Peninsular Malaysia’s indigenous people, who once mainly lived in the forest) are first in line in the field teams, clearing paths through the forest.  Only they have caught glimpses of these secretive cats.  Sometimes the field teams come across pugmarks (tiger footprints), scent marks, or scrapes tigers make in the ground, but these signs disappear with the frequent heavy rains.

Malayan tigers are one of six living subspecies of tigers, and are only found on Peninsular Malaysia.  Highly endangered, there are only about 250-340 remaining in the wild.  Around 45-50% of Peninsular Malaysia’s area is native forest, and this is where the tigers make their home.  I am visiting WCS-Malaysia’s tiger conservation program in the Endau-Rompin Landscape in the southern part of the peninsula, a forested area of over 3,000 km2 and one of three “source sites” for Malayan tigers.  To be considered a tiger source site, the landscape must be capable of supporting at least 25 breeding females, have evidence of tiger reproduction, and have a legal framework in place or being developed for the prevention of poaching or hunting of tigers and their prey.  Ultimately, this means that the area has a high-probability of securing the long-term survival of tigers.

Habitat analyses indicate Endau-Rompin can meet the source site criteria if habitat protections and anti-poaching measures are in place and effective.  To understand just how many tigers there are in the Endau-Rompin Landscape, camera traps are the best tool that researchers employ.   Typically, two opposing cameras are set up on either side of a trail, at tiger height.  When a tiger or other animal passes by, they take a series of photos or about 15 seconds of video.  A tiger’s stripes are unique, like a fingerprint, so each tiger can be individually identified and counted.

Tiger camera trap surveys are conducted in Endau-Rompin every two years.  The next survey will involve around 170 camera trap stations throughout the forest.  Camera traps are often stolen or burned by poachers or trampled by elephants.  In one case, a young tiger was caught on photo, dismantling the bungee cord that held the camera in place.

On my first full day in Endau-Rompin, we hiked an hour and a half up a hillside to view one of the camera traps.  Starting from the bottom of the hill in lowland tropical rainforest, we ascended into native palm and heath forest.  Tigers live in quite a diversity of habitats, but I never really imagined them in a forest like this.  Francis Cheong, Assistant Director for WCS-Malaysia, pulled up a giant palm leaf to demonstrate where the field teams sometimes search for tiger signs in this forest.  Male and female tigers scent mark on the undersides of these leaves, leaving a yellowish stain and a musky, pungent smell.

Checking a single camera trap can be a lot of work, and it’s often done under hot, steamy, and sometimes daunting conditions.  But the information the field teams gather is very valuable.  Though Endau-Rompin doesn’t currently have 25 breeding females, the good news from the camera trap data is that tiger populations here appear to be recovering.  Females and cubs have been spotted in the camera trap photos, and researchers have been able to follow some cubs to adulthood, as they disperse into new areas.  With effective protections for tigers, their prey, and their habitat, there is good reason to believe that the Endau-Rompin landscape will be able to secure a long-term breeding population of Malayan tigers. 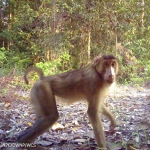 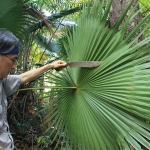 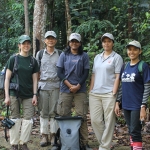 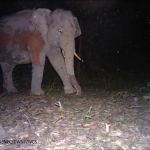 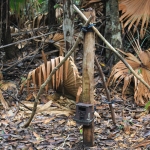 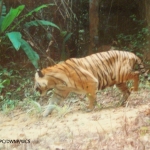 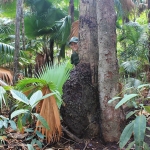 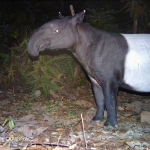 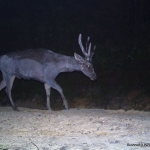 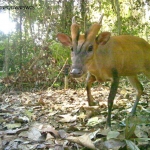 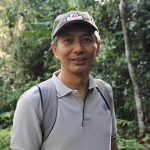