Wildlife conservation has many foundational principals, and science is certainly one of them. Whether it’s working to estimate population sizes of our smallest endangered pollinators or understanding the migration patterns of the world’s largest whales, these efforts hinge on science. At the Minnesota Zoo, our staff utilize technology on a day-to-day basis to carry out our mission to save wildlife. In addition to the newest advances in technology, some of the methods used have been around for decades and are well-established in the world of wildlife conservation.

Radio telemetry has been used in wildlife research since the 1960s and has been a critical tool for scientists across a wide array of subject matters. Dr. Tricia Markle, Conservation Researcher at the Minnesota Zoo, uses radio telemetry to inform efforts of saving Minnesota’s threatened freshwater turtles. And while it may have a complex-sounding name, telemetry utilizes fairly straightforward technology.

“Radio telemetry uses radio signals to locate animals and track their movement,” explains Markle. “A transmitter emitting a signal is attached to an animal and then the signal is detected by the researcher using a radio antenna and receiver. The receiver picks up the signal at a certain frequency and transforms it into a beeping sound, which is what we hear. The closer you are to the animal, the louder and clearer the signal comes in.” 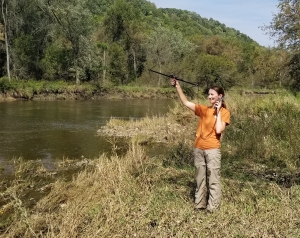 Using radio telemetry in the field to track wood turtles.

Markle and her team at the Zoo, in partnership with researchers at the MN-DNR, have been studying wood turtles in an effort to better understand how their populations are doing and what we might be able to do help. Wood turtles are native to Minnesota and are currently listed as threatened in the state. Habitat loss and fragmentation, pollution, predation, and increased flooding events have all contributed to the decline of this species.

“Wood turtles are notoriously difficult to find in the wild,” says Markle. “With VHF (very high frequency) transmitters attached to turtles, we can find individual turtles again each time we visit a site.” “We can also learn which kind of habitat is preferred by turtles at different times of the year, what an individual’s range size is, where they may be nesting, and what threats they may face (such as roads and agricultural activity) – all very valuable data,” states Markle. And by following the same individuals for multiple years, scientists can study their survival rate and better assess how a population is doing over time.

The transmitters used on wood turtles are quite small, weighing less than 5% of a turtle’s weight (even for the smallest turtles).  A special epoxy is used to glue the transmitter directly onto a turtle’s shell. When the battery life starts to run out after 1 year, a small amount of prying is all that is needed to pop off the transmitter. 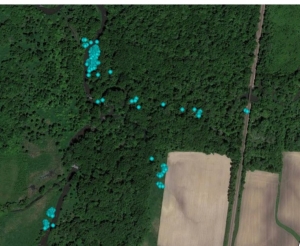 A map generated from telemetry data showing the movement of an individual wood turtle over time.

Markle and the team of researchers at the Zoo have been using telemetry to track individual wood turtles for multiple years now. For a threatened species like the wood turtle, telemetry data is valuable information that can inform the conservation of the species. In order to implement effective conservation strategies, it is imperative to first understand the species and learn as much as possible about what threats they face.

Telemetry use is far reaching and has been implemented with countless species of wildlife. For Markle, her experience with telemetry began before turtles, studying spotted owls in California. Luckily, while owls and turtles may not be too closely related, the fundamentals of telemetry remain.

Across the globe and spanning many decades, wildlife radio telemetry has proven to be an exceptionally valuable tool for scientists. As the technology improves and its use expands, it will undoubtedly continue to revolutionize the conservation of wild animals.

Funding for this project was provided by the Minnesota Environment and Natural Resources Trust Fund as recommended by the Legislative-Citizen Commission on Minnesota Resources (LCCMR).