The Minnesota Zoo’s Prairie Butterfly Conservation Program has managed the world’s only rearing, breeding, and reintroduction program for the globally endangered Dakota skipper. From this experience, we know that their caterpillars eat grasses and that they depend on a high-quality prairie. There are a lot of types of grasses on the prairie though (including some non-native invasives!), and no one has ever found the caterpillars in the wild! Do the caterpillars do better feeding on one type of grass than another? Determining the best caterpillar foods may seem like a simple question, but it has big implications for both Zoo-based and wild populations! 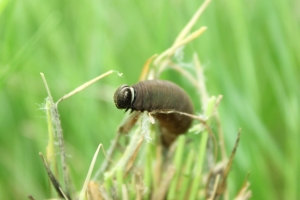 The Minnesota Zoo’s Cale Nordmeyer led research on this hidden aspect of Dakota skipper biology through experiments at the Zoo. We utilized the Zoo’s large conservation Dakota skipper population and reared caterpillars through to adulthood on eight species of grasses found in Minnesota prairies. We measured survivorship, growth rates, and other measures of “performance” to help determine which grasses they do best on. 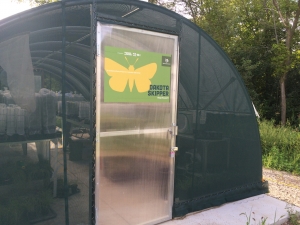 What did we find? Dakota skippers did best on the native prairie grasses that we mostly find them around in the wild and that we also feed them at the Zoo (porcupine grass and prairie dropseed). Most importantly, Dakota skippers do poorly when only offered the invasive grasses that are seriously degrading Minnesota’s prairies. For example, few individuals survived when reared on invasive smooth brome, and those that did were small and took an extremely long time to reach adulthood. Since adult females don’t appear to be picky where they lay their eggs, smooth brome could be an “ecological sink” that acts as a negative drain on wild Dakota skipper populations. This grass also chokes out other prairie natives, like the narrow-leaved coneflowers that the adults seem to be particularly fond of.

Helping Dakota skippers in the wild will need to include plans to promote grasses like porcupine grass and prairie dropseed and to also control smooth brome. Making better habitats for skippers will also provide benefits to other species.