Saying Goodbye to Musk Oxen at the Zoo

It is with heavy hearts we say goodbye to musk oxen at the Minnesota Zoo. Our two remaining elderly musk oxen had been showing progressive age-related health issues; their health further declined this spring. This marks the end of an era, as this species had been part of the Zoo since 1977.

At 43 years old, some still know the Minnesota Zoo as the “New Zoo.” But over the course of the last four decades, the Zoo has consistently grown and adapted to serve Minnesotans and hundreds of different animal species from around the world.

When the Zoo opened in 1978, the Northern Trail was home to five main species: tiger, moose, Asian wild horse, camel, and musk ox.

Zookeeper Cindy Bjork-Groebner has seen many changes over the years. She has cared for animals along the Northern Trail for nearly 32 years. For much of that time, her main focus has been caring for musk oxen.

“The minute I first saw them, I was drawn in. They were unique and impressive and I fell in love with the species,” said Zookeeper Cindy. 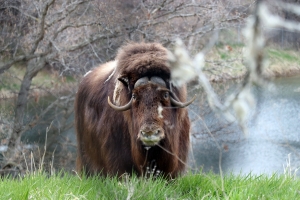 Starting with two males from Calgary, Canada, the Zoo eventually acquired two females from Winnipeg and the herd began to grow. Since 1980, 65 musk ox calves were born at the Zoo – one of the most successful records of any North American facility.

About 10 years ago though, keepers started noticing changes in the herd. The increased summer heat and humidity had begun affecting the oxen – a species native to the arctic tundra. It seems even Minnesota has now become too far south for this species to thrive.

“We saw firsthand just how much the seasons and temperature and humidity played a role in how they thrived or not,” said Zookeeper Cindy.

As summers have continued to get warmer, more heat-related issues could be spotted and keepers like Cindy could pick up on even the most subtle changes.

“It was very weather dependent with them,” she said. “You could tell they were thriving when the temperatures were colder and then the minute the heat and humidity hit, that’s when I really started watching and could notice changes.”

“First and foremost, the keepers know these animals more than they know some of their family members,” said Dr. Taylor Yaw, manager of the Zoo’s Animal Health department. “They are there each and every day and pick up on some of the smaller clinical signs that may indicate something may be going on.” 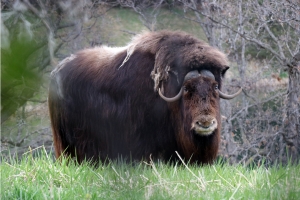 With the changes noted, the Zoo made the decision to stop breeding musk oxen about a decade ago and not acquire any new herd members. Over those next 10 years, the herd became smaller and older until only two senior females remained. Both females had a number of age-related challenges that became compounded by the spring and summer heat. In late April, the difficult decision was made to humanely euthanize the elderly pair.

“It’s a long conversation between veterinarians, curators, and Zoo leadership,” said Dr. Yaw. “We have a responsibility to these animals. When it comes to a point that we can’t manage clinical health issues, this is the most humane choice we can make.”

“I think the best thing we can do as keepers is try to do the best we can for each animal each and every day,” said Zookeeper Cindy.

This marks the end of an era for this species at the Zoo. For the short-term, the former musk ox habitat will be inhabited by a group of Asian wild horses.

A special thank you to the Zoo’s Northern Trail and Animal Health teams who had been providing our musk oxen with the best care possible – and to all the former keepers and animal health specialists who have helped care for this species for more than 40 years at the Minnesota Zoo.