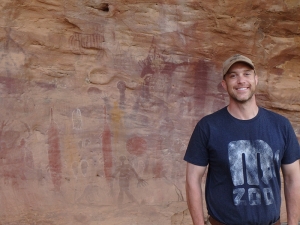 The Minnesota Zoo connects people, animals and the natural world to save wildlife. One way we do that is through a special staff grant program, the Ulysses S. Seal Grant, using private funds to let Zoo staff pick wildlife conservation programs that are meaningful to them to support. Life Support Coordinator, Matt McLaughlin, recently traveled to Australia to work in the field with Sharks and Rays Australia (SARA) to collect and survey juvenile sawfish. Population survey data collected on these apex predators will be used by the Australian government to determine conservation practices, poaching enforcement priorities, and river pollution control.

On May 11 2018, I arrived in Cairns, Australia. Cairns is a coastal city in the northeast state of Queensland and is known as the gateway to the Great Barrier Reef.  I received a conservation grant from the Zoo’s Ulysses S. Seal grant program to assist with and fund a field expedition with Sharks and Rays Australia (SARA), a wildlife conservation and research group focusing on studying the distribution and population density of Australia’s critically endangered sawfish species.

SARA is run by its founding director Dr. Barbara Wueringer, a passionate field biologist who aims to bring light to the troubled status of sawfish and increase their protection in Australian waters, which are some of the last global strongholds for these fascinating species.  Sawfish are close relatives of sharks and stingrays and are technically classified as rays.  They are distinguished by their large “bill,” a flat wide protrusion from their head that is lined on either side with rows of teeth.  They occupy a similar niche as stingrays in the rivers of Queensland and the Great Barrier Reef, acting as a top predator of the benthic zone, feeding on fish and invertebrates, making them a key part of their ecosystem.  Sawfish, like other sharks and rays, are slow to reproduce with only 1 or 2 offspring per year.  They are often caught as bycatch in fisherman’s nets, and are often killed for their bills, which have tribal and decorative value.

Our journey took us to extremely remote regions in the far northwest of the Cape York Peninsula, where we worked with the aboriginal rangers in the small community of Mapoon, as well as a short stay in the Steve Irwin Reserve by special permission of Terri Irwin. 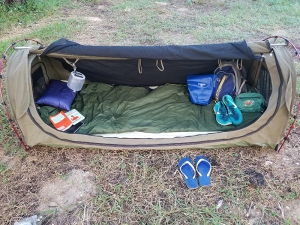 May 13-15
We began the long 2.5 day journey from Cairns to Mapoon with our 4×4 entourage, a distance of around 500 miles that must be driven slowly due to the poor conditions of the roads and frequent wash-outs.  This region is only accessible by road during the dry fall/winter months, as the rest of the year the roads are mostly underwater.  On the afternoon of the 15th we arrived in the aboriginal village of Mapoon and met with the rangers stationed there, to discuss our sampling sites and receive a formal welcome to the area.  In the evening we made our way to our first sampling site at the mouth of Janie Creek and set up camp.  I would spend the entirety of the expedition living in an Australian swag tent, familiar to anyone who knows the classic Australian folk song “Waltzing Matilda.” 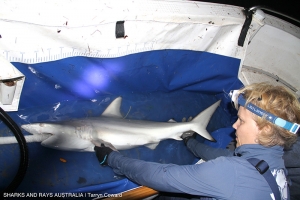 We spent 5 days sampling Janie Creek, an area known by locals to contain sawfish that travel into the estuarine rivers to pup their young.  We used gill nets, drum lines, and hand fishing to attempt to collect sawfish, and while we had a lot of success tagging and taking biometric measurements on many species: bull sharks, lemon sharks, eagle rays, nurse sharks, and blacktip reef sharks, we didn’t see a single sawfish.  All of our work was done from the research boat, as the entire area around Mapoon is heavily populated with saltwater crocodiles.  We had a regular visitor at Janie Creek, a 4.5 meter male croc named Submarine, who would make appearances at the surface of the water near our camp at low tide.  A typical day of sampling for me was a 3am wakeup to help the morning crew get ready for their shift, followed by a few hours of camp work.  After the morning crews return around 8am we cleaned gear and compiled records.  We had a long rest after lunch, and then we would prep for the evening shift which started at 4pm with boat launch around 5pm.  We would typically stay out sampling until 10pm before returning to camp for clean-up and a few hours rest in my swag before the morning shift preparation began again.

May 21-22
We regrouped with the Mapoon rangers and selected our next sampling site, a place called Billy’s Lagoon on the Steve Irwin Reserve.  The lagoon is connected with the Wenlock River during the rainy season but becomes isolated during the fall and winter months.  This area is known to contain sawfish, and while we caught a few fish, and had many venomous snakes hanging out in our camp, we again did not see any.

May 23-24
We spent our last couple days sampling an area of the Wenlock River south of Mapoon.  We also spoke at length to local fisherman about recent sawfish sightings.  The general consensus among the locals was that their numbers have drastically decreased over the last 10-15 years, with anecdotal stories of days where they’d have to pull 100 or more sawfish from their nets, with sightings becoming more and more rare.  On the afternoon of the 24 we had the pleasure of being invited into the school in Mapoon to speak about species and ecosystem conservation as well as the importance of species like sawfish.  This was a real highlight of the whole trip for me as the kids were very excited to have us there.  Afterwards, we said our goodbyes to the rangers and began the long journey back to Cairns.  While we didn’t see sawfish on the trip, which was a bad sign, the positive light is that the more SARA can report on the decline of sawfish populations the more likely the Australian government will be to increase protections and research funds for these important animals.

May 24-26
On our way back we had time to stop at an area called Split Rock, just south of the town of Laura.  There we saw beautiful 13,000 year old aboriginal cave paintings, some depicting sawfish.  We arrived in Cairns very late on the evening of the 25th and spent much of the day on the 26th cleaning and storing our fishing and research gear, and saying our goodbyes.

May 27
On my last day in Australia, I went diving on the Great Barrier Reef, which was a bucket list adventure for me.  While it was amazing to be diving in such a place, the damage to the reef is evident, and emphasized the need to protect these critical ecosystems and the life that inhabits them.  It was a privilege to represent the Zoo in this expedition and I hope to continue contributing to the effort to protect the sharks, rays, and sawfish that call Australia home. 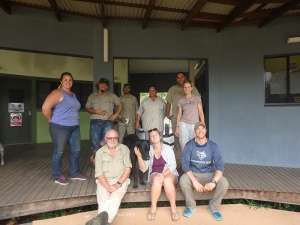 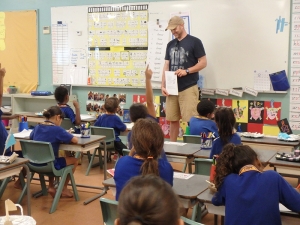 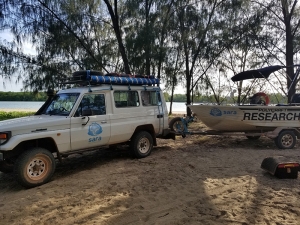 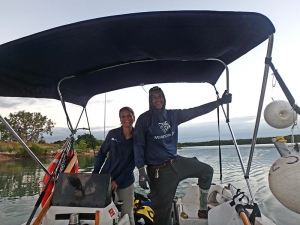