Saving Dholes with a Beep

The numbers represent different VHF frequencies that are being transmitted from devices at locations where we hope to catch a dhole.  When a trap is sprung in the forest, it pulls on a network of fishing line that tugs the transmitter upside down.  In a normal undisturbed mode, the transmitter sends a VHF signal that we hear as a normal beep-pause-beep.  If something disturbs our site and the transmitter flips upside down, we hear instead a rapid beep, beep, beep, beep!  And it is that sequence that gets our adrenaline flowing as we jump quickly into the truck to race to the site!

What do we usually find?  Maybe a monitor lizard, mongoose, or civet.  Sometimes it is just the wind that jiggles our transmitter and causes a false alarm.  Other times nothing is caught, but our transmitters are bumped by bears or elephants.  Every time the entire team races to the site (always with a veterinarian in the lead) so that just in case an animal is caught, it is for the shortest amount of time possible.  And every time we have to take care and time to reset the area to be ready for our target.

What do we want to find?  A dhole (also known as an Asian wild dog)!

Dholes are an endangered species with fewer than 2,500 remaining in the wild.  Despite this status, and their suspected continued decline, some managers have suggested dhole numbers should be actively reduced.  We are in Khao Yai National Park, Thailand where some people perceive a drop in deer numbers and blame dholes.  There is also concern dholes may be dangerous to humans.  (Note, there are no recorded instances of dholes ever attacking a person).

We hope to make a case for the dholes with science.  If we can catch a dhole and place a GPS tracking collar on it, then we can track a pack’s movements and the space they use.  This will help us estimate how many packs might be in the 840 square mile park.  We might be able to show that dholes are not overpopulated.  For example, people might be seeing the same pack at different locations.  It is especially important to protect dhole numbers because they are the only remaining top carnivores in Khao Yai.  There were never leopards documented in the park and the tigers have disappeared as a result of poaching.

Dr. Kate Jenks is a Conservation Biologist at the Minnesota Zoo.  She was recently in Thailand leading the Zoo’s efforts to save endangered dholes.  This work was initiated by Khao Yai National Park under the Thailand Department of National Parks, Plants, and Wildlife supported by the Minnesota Zoo, Smithsonian Conservation Biology Institute, Kasesart University in Bangkok, and the Zoological Park Organization of Thailand.  We have an incredible team of vets, scientists, and park research staff that are working to successfully place GPS tracking collars on dholes.

Check out the photos below.  Did the team catch dholes?  Read more about Kate’s trip in Part 2 –Dholes in Khao Yai National Park, Thailand. 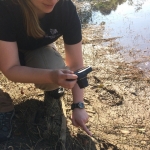 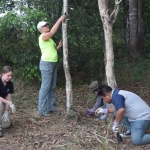 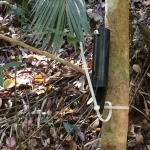 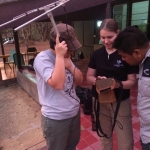 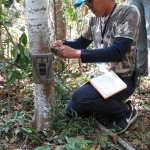 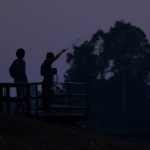 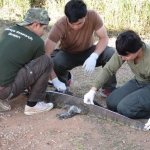 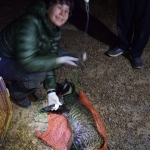 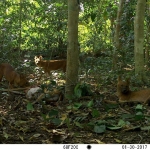