Celebrate World Rhino Day with the Minnesota Zoo on Friday, September 22! Come join us at the top of the Tropics Trail from noon-2pm to participate in rhino-themed activities. Help us honor the rangers that risk their lives to protect rhinos! You can post a letter to one of the rangers which will be hand-delivered by our conservation biologist based in Namibia. 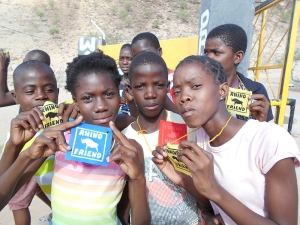 It’s been an exciting year for our work in Africa around the endangered Black Rhino. In March 2017, the Minnesota Zoo and local conservation partners throughout the country, including Save the Rhino Trust and Integrated Rural Development and Nature Conservation, launched the Rhino Pride Campaign.

The Rhino Pride Campaign is working with local communities to increase their value that they put on saving wild rhinos. We want to send a strong message from Namibians that rhinos are worth more alive than dead and that poaching is an act of stealing from the community, and will not be tolerated. When communities start to put value on rhinos the hope is it will increase their willingness to report suspicious activity that could stop poaching in its tracks. It also hopes to discourage those targeted to be recruited into poaching.

There’s a growing number of unemployed youth that are especially vulnerable to being recruited into poaching. With the Rhino Pride Campaign we hope to inject positive rhino messaging into popular cultural outlets like music and sports. To do this we’re involving a number of local Rhino Clubs to help us film a music video for an exciting new 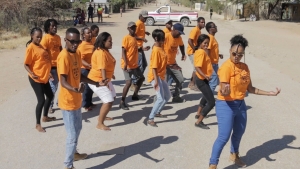 rhino song composed and performed by young Namibian artists Adora and Tulisan. We are also helping sponsor a new Rhino Football (soccer) League for over 200 youth that live in the three communities surrounding the key rhino areas. Through hosting numerous activities with local school groups  and working with farmers to develop their own “community crime watch” program we hope to improve the reporting of rhino and other wildlife crime.

Our Rhino Rangers are also prime targets for poaching recruitment. This is no surprise as they have unrivalled knowledge about the area’s rhinos. With this knowledge comes great responsibility. It is important to keep our rangers motivated to continue their work in protecting these majestic animals. In addition to providing financial incentives for good performance, we are developing a series of new 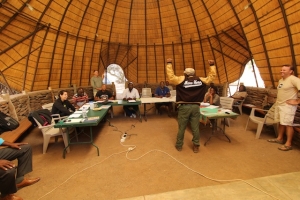 rewards to keep morale up and collusion risk down.  Specifically, we’ve designed a new ‘Rhino Hero Jacket’ based off the popular varsity or letterman jacket concept that serves to publically showcase each ranger’s achievements and skills while enhancing their status among peers and larger community.  In addition, our application for the Game Rangers Association of Africa Annual Award for Best Conservation Practitioner received 1st Runner Up.  We sent two of our senior rangers, who had never left Namibia, down to South Africa to accept the award in front of more than 400 rangers from across Africa representing every African country that protect rhinos!

Lastly, the majority of the poaching that has occurred in our area is planned and carried out by people not from the area.  Therefore, we also wanted to reach people living outside the rhino range with our rhino pride messages.  The best way to do this is through the very popular local trade fairs that take place each year around the country.  At these events, we engage with attendees about why Namibia’s rhino are special, the urgency of the poaching threat and how they can help.  People are then offered a unique way to demonstrate their support by ‘pledging’ to become ‘Rhino Friends Forever (RFF)’ by signing a poster and wearing a button and sticker with our custom RFF logo as a reminder to them and symbol for others to emulate.  The team was especially lucky to have met with Namibia’s President and Prime Minister at the Ongwediva Trade Fair in August – who vowed to be RFFs! 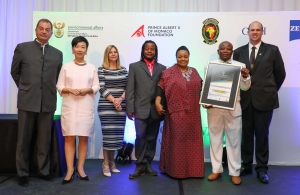 And with all this our efforts appear to be helping.  So far in 2017, we have seen four separate cases where local people reported suspicious behavior in their area to police.  In all four cases, people were arrested.  More importantly, three of the cases resulted in foiling a would-be poaching. This is clear evidence that our family of ‘Rhino Friends’ are growing and will most certainly be a significant help in securing a future for our rhino.  Rhino poaching still remains low in our area with only four rhinos being lost thus far in 2017.

Want to help our work to save wildlife? Donate today and help fund the Desert Black Rhino Project.

The Minnesota Zoo thanks the Houston Zoo for their generous support for the Rhino Pride Campaign.