Minnesota is home to nine native species of turtle, from the more commonly found snapping and painted turtles, to the relatively elusive smooth softshell turtle found lurking in sandy river bottoms. The wood turtle is Minnesota’s most terrestrial turtle and in summer it prefers forested riverine habitat and adjacent open fields. Wood turtle populations have been declining for decades and they are currently listed as threatened in Minnesota. They face a variety of threats including habitat loss and degradation, poaching, and climate change. 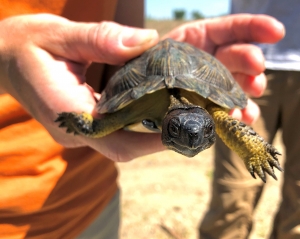 Over the past several years, the Minnesota Zoo has been coordinating a freshwater turtle program that focuses in large part on the conservation of wood turtles.

Current wood turtle conservation efforts conducted by the Minnesota Zoo and the Minnesota Department of Natural Resources (DNR) include a headstarting program. Adult wood turtles typically venture onto land to lay eggs in early to mid-June. The eggs, often buried in loose sandy substrate, are easily found and predated upon by animals such as raccoons and skunks. And for those eggs that do survive, small hatchling wood turtles can be quick food for many mammals, birds, turtles and large fish.

“For a species such as the wood turtle, which is slow to reach reproductive maturity and has a relatively small population, it’s imperative to its future that enough young survive to eventually reproduce and keep the population stable,” notes Tricia Markle, Conservation Biologist with the Zoo.

To help local populations of wood turtles, researchers with the Zoo and DNR have been collecting at-risk turtle eggs and rearing the hatchlings through their first year of life when they are most vulnerable to a suite of threats. The following summer, after they have grown considerably in size, the yearling turtles are then released back into the wild. 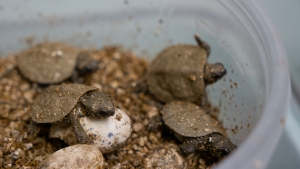 The freshwater turtle conservation program continues to grow, and this past summer 30 headstart wood turtles were returned to their home. In addition, a small subset of those individuals were outfitted with small tracking devices. This technology will allow Zoo researchers to gather data on where the turtles move, how they use the habitat, and what additional threats they may face. In total, 22 wood turtles are currently being tracked remotely by DNR and Zoo staff, and these individuals vary in age and location. These data offer valuable pieces of information that can inform conservation efforts of the species.

This past year also marked the conclusion of a road mortality study conducted in partnership with the Minnesota Department of Transportation. A significant portion of turtle populations are killed every year as they cross roads in search of habitat and mates. This research aimed to quantify road mortality at various sites across the greater Twin Cities area and test and implement reduction strategies. 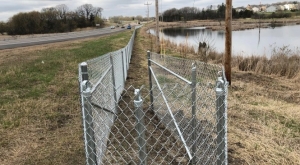 “One mitigation strategy we tested was fencing along busy roadways where we knew mortality was high,” explains Markle. “Fencing not only kept turtles and other small animals from crossing the road, but diverted animals back into the wetland they came from or to safe passages under the road.”

As was hoped, the fencing was largely very effective. “We saw up to a 90% reduction in mortality at some sites after the fencing was installed,” Markle notes. “This is really promising and is one way we can start to address the threats that our freshwater turtle populations face across the state.”