In 2009, the Minnesota Zoo joined forces with Save the Rhino Trust in Namibia to help protect critically endangered black rhinoceros. This specific population of black rhinos located in the arid, rugged north-west of Namibia are unique in that they are one of the last truly wild rhino populations and the largest to persist outside of formally protected areas in the world. Most recently, our work has focused on supporting teams of local ‘Rhino Rangers’ to conduct rhino monitoring patrols. We are proud to share that our efforts have helped sustain our “zero poaching” streak in north-west Namibia to 2.5 years and counting! 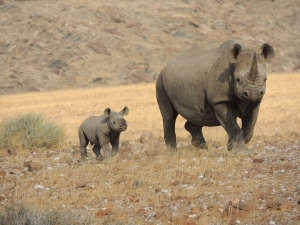 This photo of a female rhino and her calf taken by a Rhino Ranger on patrol won “Best Photo.”

Earlier this month, over 100 rangers, local community leaders and rhino conservation organizations gathered together at World’s End in remote northwestern Namibia to celebrate the incredible grassroots efforts to protect the world’s last truly wild population of black rhino at the 1st Kunene Rhino Award ceremony. Over 150 medals and other prizes were awarded to more than 60 rangers for yearly individual achievements ranging from most rhino sightings (379), to most miles tracked on foot (1,515 miles, the same distance as Minneapolis to LA!). Most importantly, the roof was raised with cheers following the announcement of over 2.5 years of zero poaching in the region and a heartfelt ‘Thank You Rangers’ video recorded by local school children was presented. The ceremony was followed by a Namibian feast cooked over fire and even fresh cupcakes! Minnesota Zoo’s conservation biologist based in Namibia, Dr. Jeff Muntifering, who helped organize and facilitate the event, had this to say:

“What an inspiring, uplifting day…. A ranger even came up to me afterwards and said he couldn’t wait to show his children his medals. Rhino & Ranger Pride today was bulging at the seams!” 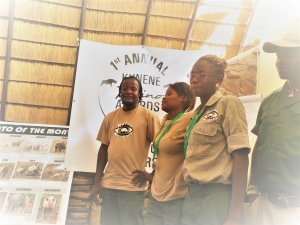 We at the Minnesota Zoo could not be prouder of the amazing work these brave and committed members of the community do to protect this critical black rhino population.  We are very grateful for our many supporters, especially the Dietrich Family Foundation and our zoo partners including Houston Zoo, North Carolina Zoo, Great Plains Zoo and Phoenix Zoo for their loyal support!

A huge additional thanks to WWF-Namibia and Minnesota Zoo for providing awards and refreshments for this incredible event. And thank you to all who support the Zoo through membership and visits and help make wildlife conservation possible!