The Minnesota Zoo recently became the new home to two (extremely adorable) orphaned puma kittens from Washington. They are currently behind the scenes being cared for by our wonderful veterinary staff to make sure they are as healthy as possible before making their public debut later this year. Here is a little update on how they’re doing from zookeeper, Deb.

I was able to weigh them on Sunday (11/20) and both have gained a bit of weight since November 11.  On November 11, Sequim was 9kg and Olympia was 8.65kg. This past Sunday, Sequim was 10.4kg and Olympia was 10.1kg, so we are seeing very nice weight gain. In order to weigh them, I set up a large scale in their quarantine area and bolt a box on top and each kitten takes turns jumping in the box which holds treats for them. Olympia had her exam and spay on Wednesday November 16. She is doing well, but has a little swelling on the incision site which we are monitoring. She is acting like nothing happened. Sequim had his exam and neutering on November 22. Both kittens are being treated for giardia and tapeworms, which is not terribly unusual since they were orphaned in the wild and were open to an array of parasites. I was right about my male/female prediction by watching their personalities. He (Sequim) is more laid back and calmer, while she (Olympia) is a little more cautious and not as willing to come to the front of the pen without a little food motivation. We are also starting to see more of a size difference in their heads. He also has a distinct notch in his left ear that is getting larger as his ears grow. Olympia is also more dependent on her brother. We separate the kittens while we feed them to monitor their food intake and she always goes into his cage to meet him when we are done. Whenever I go in to clean or feed I find them laying together, they are very cute!

Be sure to check back often for more updates on the kittens and you to learn more about pumas. 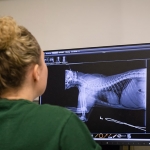 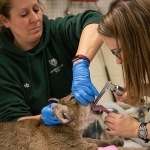