The Minnesota Zoo is dedicated to wildlife conservation around the world. We are fortunate to have staff with a strong desire to learn more about all species of animals through various programs such as the Ulysses S. Seal Conservation Fund of the Minnesota Zoo. Below is a great blog post written by one of our staff, Amy, about her time in northern Michigan. 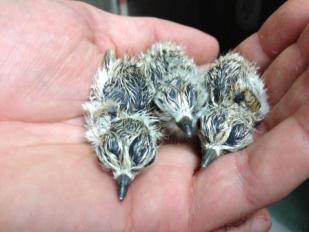 On the sandy summer beaches of the Great Lakes, you may never notice the beautiful but inconspicuous shorebird, the piping plover, raising its young along the shoreline.  The endangered plover is a small sparrow-sized bird that blends in perfectly with the cobbled beaches and is a surprisingly fast runner!

When I joined researchers in early July in the northern Lower Peninsula of Michigan (the “tip of the mitt”, they say), the plovers were already preparing for their migration to their wintering grounds around the Gulf of Mexico and southern Atlantic shorelines.  On my first trip to check on plovers at Bliss beach, we found two chicks with dad foraging near the water; when we couldn’t spot mom, we decided it was likely that she had already flown south to the wintering grounds.  The plovers were doing well and even knew to retreat to the exclosure that researchers had placed around their nest when they felt threatened.

The wire exclosures were placed around the plover nests earlier in the season, keeping larger predators out while allowing the plovers to move freely in and out of their nest site and the surrounding area.  Since researchers started using nest exclosures hatching success has increased by 40%!  Researchers also placed signs around the area, warning beachgoers that there are endangered birds in the area and prohibiting people (and their pets) from approaching nest sites. 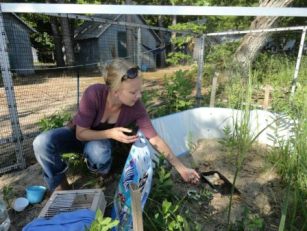 But the piping plover hasn’t always had protection like this.  Plovers in the Great Lakes have been struggling since the mid-1900s, mainly because of increased beach use, for recreation and housing, and were listed as an endangered species in 1986.  Roaming cats, off-leash dogs, bad storms and natural predators also pose a serious threat to plovers.

Researchers at the University of Minnesota, in collaboration with numerous other organizations, have been working to protect the Great Lakes plover population since the 1980s and, slowly but surely, the plovers are starting to come back.  With nest protection and monitoring, as well as captive rearing of abandoned chicks, the population has increased from 11 to 57 breeding pairs (a far cry from the 500-800 pairs that historically nested in the area). Despite the slow recovery, the endangered status of the piping plover has allowed the preservation of shoreline in Michigan that helps many other animals, such as terns and merlins, making the plover an “umbrella species”- where the conservation of one species helps to protect other species in the area.

During these critical summer nesting months, researchers are housed at the University of Michigan Biological Station where they also raise the abandoned piping plover chicks in a specially created facility.  I spent most of my time helping to raise the abandoned chicks.  This year, fewer abandoned eggs came back to the Biological Station to be hatched which means the protective measures researchers have taken are working.

Zookeepers from around the country rotate in to the Biological Station every couple of weeks to care for the abandoned chicks until they are old enough to fly at around 30 days old.  When I arrived, we had two groups of chicks – four chicks around 20 days old and two chicks at only 3 days old.  With their adorable little ‘peeps’, they quickly won me over.

With feedings every three hours, and a diet of blackworms, mealworms, crickets, and wax worms, the chicks grew fast!  But none were old enough to be released before my time there was done.  Now I can only wish my little plover friends the best of luck on their long flight south and say I hope to see them next summer at ‘the tip of the mitt’.