The Minnesota Zoo is fortunate to work with many accomplished partners who are equally passionate about saving wildlife. Researchers at the Zoo have been partnering with the Minnesota Department of Transportation (MnDOT) since 2017 in many innovative ways and have worked together over the years to raise awareness and help save Minnesota’s beloved wildlife. 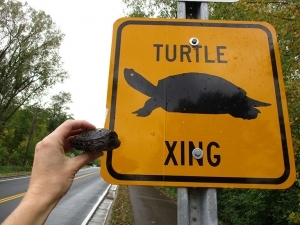 On any given day in the height of Minnesota’s summer season you may find Tricia Markle, dressed in brightly colored and reflective safety gear, surveying along a stretch of highway. Markle, wildlife conservation specialist with the Minnesota Zoo, would likely agree that this aspect of her job is a little less than glamorous. As she and her team wander stretches of highway across the state they are looking closely for signs of roadkill, and specifically, evidence of unfortunate turtles. Many species of animals are threatened by speeding vehicles. And freshwater turtles, with their classically slow pace and in their search for new habitat or to lay their eggs, are especially vulnerable. The Minnesota Zoo and MnDOT have been working together for several years to study how to reduce mortality of turtles and other animals on roadways as well as increase public safety.

“Turtles are our main focus in this study as their populations suffer greatly when even a small number of adults are killed prematurely,” says Markle. “This is primarily because so few turtles make it to adulthood and their populations rely on surviving adults to produce young every year for decades. Unfortunately, turtles are very bad at crossing roads,” laments Markle. “They have evolved to be nearly indestructible in nature but are sadly no match to vehicle strikes.”

Through this ongoing study, researchers estimate that tens of thousands of turtles are killed every year on Minnesota roads. A loss to turtle populations of that magnitude is not sustainable in the long term and a need for a solution was evident. As it became increasingly clear just how devastating vehicle strikes are to Minnesota’s freshwater turtle population, researchers decided to devise and test some mitigation measures. Together, MnDOT and Zoo staff involved in the study settled on testing the effectiveness of specialized fences that would hopefully keep turtles and other small wildlife off roadways. A simple chain-link fence was created and installed along a few stretches of highway that had been deemed especially threatening with the hope that it would deter enough turtles from attempting to cross. This aspect of the project was overseen by MnDOT’s Christopher Smith, a Protected Species Coordinator who also played a key role in the development of the project several years ago. 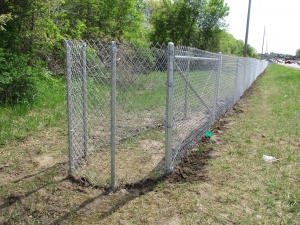 “The key to this design is to trench the fence down 2 feet to prevent any critters from getting underneath along with the wrap-around end treatments which direct moving turtles who hit the fence back to the wetland or to a safe culvert passage underneath the road,” explains Markle.

These fences may be relatively simple in design and implementation, but they have proven to be quite effective. Along the stretches of road that are bordered by one of these fences, turtle mortality dropped by 60-85% in the first year alone. The majority of turtles that were still getting hit were young turtles small enough to fit through the chain-link gaps. Fences were therefore retrofitted in spring 2021 to make the gaps smaller and researchers have now seen another significant drop in turtle mortality as a result.

In the future, there is potential that MnDOT and the Zoo could partner to test and research new wildlife underpasses for turtles and other small animals. While the fences appear to be quite effective in keeping small animals from crossing dangerous roads, many need a safe way to bypass roads in their search for new habitat or breeding and nesting grounds. Thus, MnDOT is currently looking into the possibility of box-style culverts (a wildlife tunnel, of sorts) which could help facilitate safe crossings in areas with high road mortality. 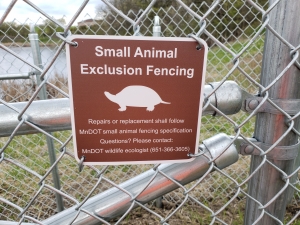 The work that the Zoo and MnDOT have been able to orchestrate is vital to the conservation of wildlife in Minnesota. Freshwater turtles play a key role in helping to keep our lakes and rivers clean and healthy. Both agencies are eager to continue this work in the hopes of securing a positive outlook for turtles and the ecosystems they inhabit.

“Our partnership with MnDOT has been a great opportunity for the Zoo to work with another state agency to help find solutions that benefit both people and wildlife in Minnesota,” reflects Markle.

Funding and support for this project was provided by: the Minnesota Department of Transportation; the Minnesota Environment and Natural Resources Trust Fund as recommended by the Legislative-Citizen Commission on Minnesota Resources (LCCMR); and the Clean Water, Land & Legacy Amendment.