The Minnesota Zoo’s freshwater mussel project studies and rears several different species of mussels in order to help restore wild populations throughout Minnesota. This past summer, the project has been supporting a study on the age-old question of nature versus nurture, using freshwater mussels as their subject. 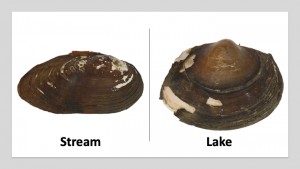 Sean Keogh, PhD student at the University of Minnesota and Bell Museum of Natural History, has spent a lot of time examining and studying the different shell shapes of freshwater mussels. And he has noticed a fairly predictable trend. Mussels of the same species are often found to have very different shell shapes, depending on the habitat they are in. Those in lake habitats tend to exhibit a more circular and inflated shape, similar to a volleyball. Whereas individuals of the same species found in streams and rivers take on a more elongated, oval shape. Keogh presents two possible explanations for this trend in shell shape differences – either the environment the mussels are in (lake vs. river) induces the difference in shape as individual mussels grow, or shell shape is a trait genetically handed down to offspring and different populations of mussels have evolved over time to display differing shell shape. Essentially, is it nature (the lake or river habitat they are raised in) that causes these differences, or nurture (the genetic makeup they have inherited from their parents)?

To attempt an answer to this question, Keogh has partnered with researchers at the MN DNR while the freshwater mussel project at the Minnesota Zoo will rear thousands of baby mussels which will eventually be placed in either lake habitats or streams. All the young mussels that are part of this study came from one single female mussel, thus they are genetically very similar to each other. Because of this close relationship, if researchers observe differences in their shell shape as they grow, they will have strong evidence that it is caused from the nature of their surrounding environment. 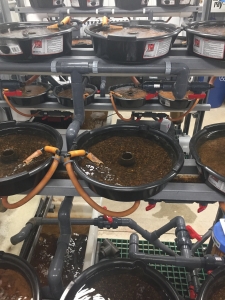 When these thousands of mussel siblings first arrived at the rearing facility at the Zoo, they were microscopic in size. Over the past few months, Ben Minerich, Mussel Biologist at the Minnesota Zoo, has been carefully and meticulously rearing these mussels, ensuring they survive to an age and size where they can be transported to their wild habitats. For Minerich, this partnership has offered an exciting opportunity to practice new rearing techniques that can be used in future conservation projects as it’s the first time researchers at the Zoo have been able to study and rear mussels from such a young age. And keeping ten thousand tiny mussels alive and healthy is no small feat! The specially designed and built rearing facility at the Zoo has the ability to pump in fresh lake water from the nearby lake while also ensuring diseases and possible predators don’t make their way in. These mussels are also receiving supplementary feed to maximize their growth. Daily checks to control temperature, water flow, and other metrics are also necessary. 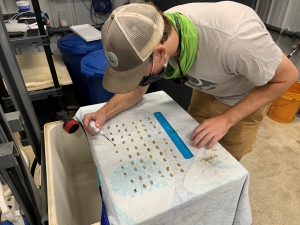 As the mussels grew in size over the summer months, Keogh prepared them for release. He has given each individual mussel a colored marking so that they can all be identified and tracked for years after they are placed in their wild habitat. This will allow Keogh to watch and record as they grow and take shape. Understanding an animal’s ability to adapt to a rapidly changing environment is key in researching how climate change may impact these at-risk populations in the future.

Freshwater mussels are filter-feeding animals that are incredibly important to the health of their ecosystem. Mussel beds filter and clean the water and stabilize the substrate for healthy plant and animal life to flourish, much like a coral reef. Unfortunately, freshwater mussels are the most at-risk group of animals in the United States. Historic harvesting, dams, pollution, climate change, and invasive species have threatened populations and pushed many to the brink of extinction. 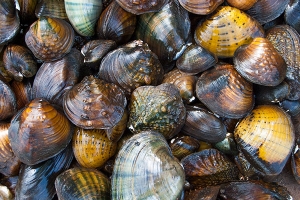 Freshwater mussels are the most at-risk group of animals in the United States.

There are ways you can help secure a future for Minnesota’s freshwater mussels! Invasive zebra mussels are a major threat to native mussels. If you go boating in lakes or rivers, be sure to clean and fully drain your boat and trailer, as well as physically remove any plants or animals. This will help prevent the spread of invasive species between bodies of water. Freshwater mussels are also susceptible to water pollution. Be sure to never dump chemicals or hazardous waste and avoid using pesticides and fertilizers on your lawn or garden. And be sure to pick up after your pet! Pet waste that is not removed pollutes local bodies of water and harms the wildlife that live there.

You can learn more about the Minnesota Zoo’s freshwater mussel conservation project here!

This project partially funded by the Bell Museum Davenport Fund.