Monday, May 10, 2021|Conservation, Freshwater Mussels, In The Field, Minnesota Conservation|

May is Lake Cleanup Month, and we’d like to announce the winner of our “Most Dedicated to Lake Cleanliness” award… Congratulations to Minnesota’s native freshwater mussels! As the world’s most efficient and productive natural filters, we can’t think of a more deserving group of organisms to be awarded this title.

Home to approximately 300 species of native freshwater mussels, North America is a biodiversity hot-spot, claiming more native species than any other place on earth. Unfortunately, mussels today are facing a myriad of threats. Pollution, dams, historic harvesting, invasive species, and climate change are all working together to threaten the future of these important species. In North America, two thirds of all freshwater mussel species are listed as endangered or threatened. Freshwater mussels are currently some of the most at-risk group of organisms on the planet.

The Minnesota Zoo’s Freshwater Mussel Project has been conducting research on the conservation of these species in a variety of novel and interesting ways. In partnership with the Minnesota Department of Natural Resources (DNR) and the United States Fish and Wildlife Service (USFWS), researchers at the Zoo have been rearing juvenile mussels until they are big enough to be reintroduced into selected Minnesota waterways. In addition, a suite of trials is underway to better understand how to successfully rear mussels through measuring their growth and survival.

“We’ve been doing a lot of work to study what types of sediment mussels do best in. Not only does this provide us information with how to most successfully rear mussels for reintroduction, we’re also analyzing what kind of habitats mussels likely do well in out in the wild. And this could help inform reintroduction efforts of the DNR,” explains Ben Minerich, Mussel Biologist with the Minnesota Zoo. “We’re also collecting behavioral observations on what mussels do over the course of their life and how they might respond to seasonal changes, daylight, and weather events.” 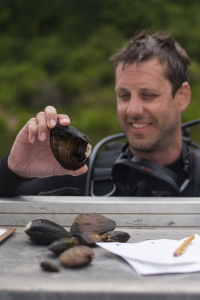 The ultimate goal of the Freshwater Mussel Project is to aid our partners in reestablishing threatened and endangered mussel populations across Minnesota, and to educate the public on the importance of healthy mussel populations.

“Mussels filter water to remove bacteria, algae, and pollutants which makes our water clearer and healthier. And in that process they feed many other animals that live on the river bottom. They also create and support habitats for fish and other organisms. All of this increases biodiversity. Mussels really are a foundational species,” says Minerich.

As the Land of 10,000 Lakes, Minnesota has ample habitat to support freshwater mussels. But in order to do so, we have to do our part for mussel conservation.

“You can help support Minnesota’s freshwater mussels a variety of ways,” notes Minerich. “Keeping our lakes and rivers clean is very important, so be sure to pick up after your pet at home and in public spaces. You can also reduce or eliminate fertilizer and pesticide use. And be sure to properly drain and clean watercraft to avoid transporting invasive species between bodies of water. “

By taking action on behalf of Minnesota’s mussels, you’re also supporting the health of thousands of species that rely on freshwater resources- including each one of us!