What would have happened to the California Condor if no one stepped in to help? The population went from 27 birds in 1987 to 446 birds as of 2016! During my travels to Tasmania to work with the Save the Tasmanian Devil Program, I started learning about the other animals in need of help in the island state. One of the Minnesota Zoo’s latest conservation projects through the Ulysses S. Seal Grant is to help the critically endangered orange-bellied parrot from Australia. This brightly colored, tiny bird is one of only two species of parrot that migrate. They breed in the remote wilderness of Southwest Tasmania until the end of March and then make the dangerous journey north across the Bass Strait to the Southern coast of mainland Australia to spend the winter. Every year, researchers anxiously wait to see how many of the parrots make it back to their breeding grounds after their big migration. 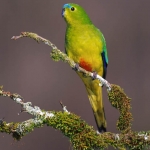 There are several contributing factors to the decline in the orange-bellied parrot population. The coastal saltmarsh habitat they use in the winter has either disappeared or has been severely degraded since European settlement. It’s all about location for these birds! They are quite picky about how close they live to the seeds, berries and flowers they eat and help disperse. These parrots prefer areas that have experienced a bush fire within the last 3-13 years because it creates optimal growing conditions for the plants they eat.  Historically, the land the parrots live on was burned more regularly to keep brush down but recently it has been longer between burns. A ten year long drought in their overwintering habitat has also effected the amount of food they have been getting. Just the fact that there are so few of these parrots left is a threat too. Inbreeding can make them more susceptible to diseases such as Psittacine Beak and Feather disease and other sudden changes with their health or in the environment. Since they migrate as a flock, there are less adults that can help younger, inexperienced migrators and less eyes on the look-out for predators. Introduced species such as rabbits, livestock, gliders, foxes and starlings pose a huge threat to the birds by causing erosion to the land, predation, or taking over the hollow cavities the parrots usually nest in. 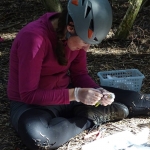 Right now is the orange-bellied parrot’s last chance for survival before the species disappears from the wild.  This breeding season only 11 males and 3 females survived their migration back to Tasmania. Luckily, the Tasmanian Government and the Difficult Bird Research Group based out of the Australian National University have a plan. They launched a massive donation campaign and will be able to closely monitor the parrot’s nests this year based on funds raised. If one of the 3 gram sized babies is having a rough start to life, the team will intervene. For us that are parents, we know how difficult it is to get up every few hours to feed a new baby. Now imagine you have to scale a 30 foot tree to feed that baby every 3 hours! (this is usually the male orange-bellied parrot’s job). That’s what the research group will do if that’s what it takes to get a successful fledgling. Dedication!

They also have a back-up insurance population of birds in 10 different facilities housing 325 individuals as of April 2016. If not for these places, they would not have the facilities or knowledge of how to care for these parrots. Places like Werribee Open Range Zoo keep the parrots in large habitats so that if they are chosen to be released into the wild, they will have strong muscles and be used to foraging for food on their own. Twenty females under human care were released this year from the breeding facility in Hobart. Unfortunately, birds released from the captive population tend to have about half the survival rate as wild birds and a much lower fertility rate but it is necessary to try and get more chicks born in the wild, balance the sex ratio of males and females and to expand the gene pool. This year the team is able to use new incubators and brooders that the Minnesota Zoo purchased to not only care for eggs and nestlings in need of extra help but to transport eggs and baby birds from the insurance population to be placed into the wild parrot’s nests if their eggs turn to out to be infertile. Funny thing for a bird to have to take a helicopter but that’s how they transported a baby named Matilda in January. She was accepted by her foster parents and successfully fledged in February! All together there were 16 nesting attempts and 20 bred in the wild this year. Researchers even caught a glimpse of a bird known as Blue/Black F. He is the oldest orange-bellied parrot in the wild at 10 years old and has likely traveled over 5,600 miles during his migrations over the years!

It is so strange to think a whole species’ fate can rest on a small group of people that are dedicated to saving it. The research team estimates that it takes $44.49 USD per day to monitor one chick to fledgling which takes up to 55 days. The funds raised for the research group came from more than 1,600 people. It goes to show that every penny counts, even small donations can add up to help save an entire species. The Minnesota Zoo hopes to see more stories like Matilda’s and Blue/Black F and this species brought back from the edge of extinction.