Bison conservation efforts continue to make huge progress in Minnesota this year.  The Minnesota Zoo, in cooperation with the Minnesota Department of Natural Resources established a partnership in 2012 to conserve and enhance the bison genome in the state of Minnesota.  Since that time, considerable work has been done, with much more happening this fall.

Genetic testing continues on the herd at Blue Mounds State Park (BMSP).  All of the breeding age bison have been tested so far and now we are starting to test the calves as well.  DNA samples were taken in September, 2015 from 17 calves at BMSP.  These samples were submitted to the lab at Texas A and M for analysis on genetic contribution and parentage information.   Thirty six calves born this past spring were also recently sampled in September of 2016.  Results from these tests can be used to make future herd management decisions on animal transfers and new bull acquisitions. 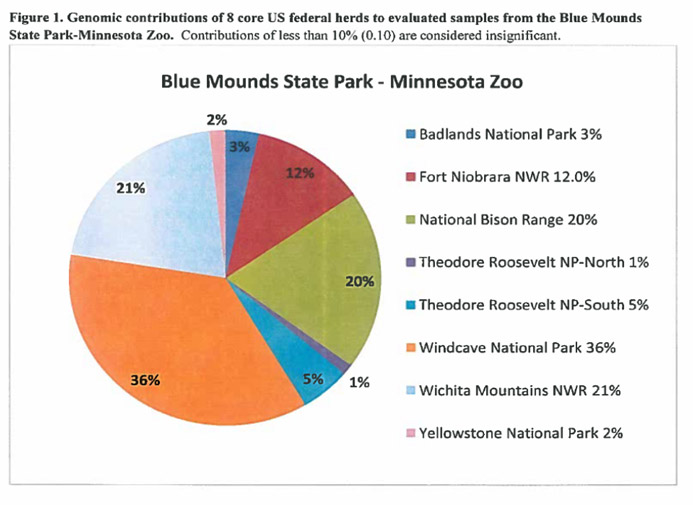 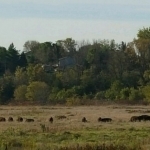 Minneopa State Park now has a bison herd.  Eleven female bison were reintroduced into the park in September of 2015.  Three of those bison came from the Minnesota Zoo and eight were brought in from BMSP.  Three calves were born there this spring, bringing the total now up to fourteen bison living in Minneopa.  These bison are the start to a herd of about 40 animals that will reside in the 350 acre drive-thru park near Mankato.  Park visitor vehicle traffic at Minneopa has increased approximately 270% as a result of the reintroduction.  A new breeding bull for Minneopa bison will be acquired from Theodore Roosevelt National Park this October.

One of the important goals of the Minnesota Bison Conservation Herd is to manage the population for maximum genetic diversity.  Past genetic analysis from our DNA sampling efforts has shown where to obtain new breeding bulls.  Past bulls have been acquired from Wichita Mountains National Wildlife Refuge and Badlands National Park, with another one due to come in soon from Theodore Roosevelt National Park.  However, Yellowstone stock is one of the least represented lineages in our herd and therefore the most desirable.   Yet, obtaining a bull from Yellowstone National Park has always remained impossible due to a transfer moratorium by government authorities.  Recent research techniques have now opened up the possibility of finally being able to acquire a Yellowstone bull. 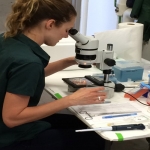 This fall we hosted Dr. Jennifer Barfield, who is a research scientist from the Colorado State University, to conduct embryo transfers from Yellowstone bison into Minnesota Zoo bison.  Dr. Barfield brought with her frozen embryos that had been flushed from Yellowstone bison cows.  She then transplanted these embryos into the four Minnesota Zoo bison cows, which will hopefully result in Yellowstone calves being born at the zoo next spring.  If one is bull, he will be used as a future breeder in our herd and Yellowstone genetics will finally be added!