A Milestone – Reintroducing a lost prairie butterfly for the first time 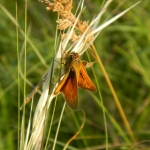 For millennia, they bounced between the grasses and patrolled the purple coneflowers. Dakota skipper butterflies were once widespread across Minnesota’s prairies, where they served as pollinators and as an important link in the food web that sustains songbirds and other beloved wildlife. Now, they have almost disappeared. Luckily, this quick orange butterfly now has a chance at a comeback in Minnesota! After more than 5 years of hard work, the Minnesota Zoo is conducting the first ever reintroduction of the endangered Dakota skipper back into the wild.

Once found across most of western and southern Minnesota, and more broadly from near Chicago to Saskatchewan, 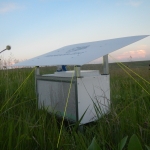 Dakota skippers are prairie specialists. The caterpillars feed on the deep rooted grasses that anchor fertile prairie soils, and the adults drink nectar from and find mates at native purple coneflowers. Their prairie homes have almost disappeared though, with only about 1% of Minnesota’s prairies remaining. Much of what is left is fragmented into small remnants. In the last few decades, Dakota skippers (and many other prairie butterflies) almost completely vanished from Minnesota and the Upper Midwest. Years of surveys by Minnesota Department of Natural Resources biologists indicate that Dakota skippers have likely disappeared from dozens of sites and now can only be found in one or two places in the state! The species is listed as Threatened nationally and Endangered in Minnesota. 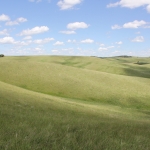 Behind the scenes since 2013 though, Minnesota Zoo scientists have established and grown the first and only conservation breeding program for Dakota skippers. Working under rigorous protocols established in partnership with the U.S. Fish and Wildlife Service and other agencies, we have been collecting a limited number of eggs under from relatively large populations within the Sisseton Wahpeton Oyate’s Lake Traverse Reservation in South Dakota as well as from the last known population in Minnesota, near Moorhead. These eggs are brought back to the Minnesota Zoo and reared through to adulthood the following summer. The Minnesota Zoo is the first and only institution to successfully breed multiple generations of Dakota skippers entirely in human care. We are literally writing the book on how to raise and breed Dakota skippers. 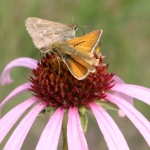 Now, a new chapter has begun – reintroductions!  The Zoo’s Dakota skipper population is now large enough that we are reintroducing Dakota skippers to The Nature Conservancy’s Hole-in-the-Mountain Prairie Preserve, near Lake Benton. This beautiful prairie once had large populations of Dakota skippers, but they had not been seen there (or anywhere else in southwest Minnesota) since 2008… until June 21, 2017! After a multi-year planning process involving a consortium of experts, Minnesota Zoo biologists brought Dakota skippers to Hole-in-the-Mountain Prairie to reestablish this lost population. The butterflies are brought to the Preserve as pupae and placed in a screened box nestled into their prime prairie habitat surrounded by wild coneflowers. Minnesota Zoo conservation biologists are checking this box every day and releasing adults as they emerge, returning them to the wild. We are also surveying the Preserve and adjacent prairies to see how the skippers are moving across the landscape.

We don’t exactly know why their populations declined, and many factors likely contributed, but the effort to bring back Dakota skippers to a prairie where they were once common can help us figure it out. Our hopes rise with every one that settles back into its prairie home, skipping between purple coneflowers like they did for millennia. 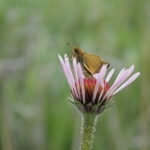 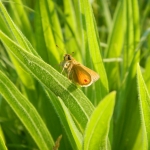 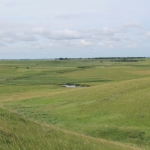 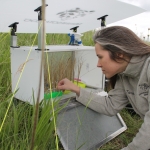 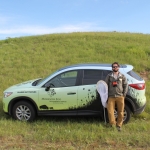