The Minnesota Zoo is home to nearly 5,000 individual animals that make up over 450 species, many of them threatened and endangered. The Zoo is also lucky enough to have hundreds of incredibly dedicated, intelligent, and creative staff and volunteers working every day to care for our animals and welcome our guests.

Ben Minerich, Conservation Specialist, has worked at the Zoo for nearly a decade in a variety of roles. His experience started in the Aquariums department, helping to lead the care of the coral, jellyfish, Asian fish, and Minnesota fish tanks.

“Throughout my career I’ve been drawn to working with sensitive aquatic invertebrates,” explains Minerich. “Jellyfish were such a fantastic mystery to me and I was very curious to understand their life cycle better to be able to display them in aquaria. 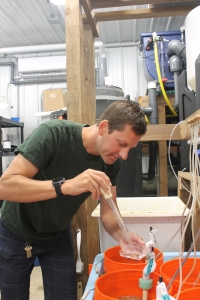 “I had very little experience with mussels other than finding them in the river when I was young. But when I learned about the lifecycle of mussels, it was like the same revelation I had with jellyfish and I just had to learn more about them,” states Minerich. “A large part of successfully raising jellyfish is creating specialized tanks that create circular water flow and keep them suspended in the water column and making sure the water quality is pristine.”

Rearing freshwater mussels requires a similar level of detail and focus on water flow and quality. Mussels are filter feeders, siphoning water and acting as a living filtration system. They are often very sensitive to changes in water quality in both wild settings and in rearing tanks. Minerich has been able to transfer his knowledge of raising jellyfish to freshwater mussels, and aid in the conservation of these species.

Freshwater mussels are found throughout much of the world, but North America is a biodiversity hotspot for these animals. There are approximately 300 species of freshwater mussels native to North America, but unfortunately they are some of the most at-risk animals in North America today. Nearly three-quarters of the native species are currently listed as endangered, threatened or of special concern. Historical over-harvesting, habitat destruction, dam construction, and pollution have contributed to their demise and resulted in at least 30 species going extinct- one of the highest modern extinction rates for any group of organisms on the planet. 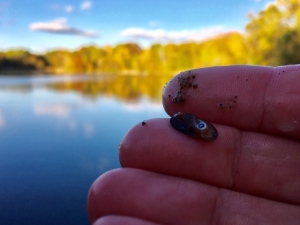 A small and young freshwater mussel.

The Zoo’s freshwater mussel conservation program works to raise awareness and ensure a future for these important species within Minnesota’s aquatic landscape. The Zoo is joining the Minnesota Department of Natural Resources’ efforts to restore native mussel populations in Minnesota. Minerich currently manages the rearing and research of several species on Zoo grounds, with the goal of releasing many back into Minnesota’s waterways.

Minerich’s work with mussels has shifted and evolved over the years, and he has found no shortage of fascinating discoveries.

“Every discovery shared by our partners and scientists in the field about what mussels need to grow paints an increasingly higher-resolution picture about how they live in the wild at different life stages and under different conditions,” explains Minerich. “For example, while working late into the evening last summer, I suddenly noticed that almost every black sandshell mussel that had been buried in the sand for the past several months was popping out of hiding and moving all over. I continued observations over the following months to confirm that mussels were continually quite active at night. This opened my mind to something completely new that I never even considered as a behavioral tendency of mussels, something that perhaps is unique to the systems I rear them in and might impact how I raise different species”

As Minerich explains, the research and rearing and release programs help bring to light the complex story of how freshwater mussels interact with their environment, and how we might be able to help keep them from the brink of extinction. “Each of these discoveries puts another piece of the puzzle in place to understanding how these animals interact with their habitat and how to determine if their rearing conditions best replicate how their preferred natural environment.” 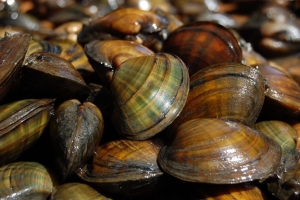 Freshwater mussels are critical to healthy aquatic systems in Minnesota. Not only do they clean and filter water, they help stabilize sediment and create conditions for entire ecosystems of aquatic life to thrive. Unfortunately, there are many factors today that are threatening native mussel species, including pollution, dams, and the uncertainty that a changing climate brings.

You can help secure a future for freshwater mussels in Minnesota through a variety of simple actions!

“Go out and enjoy your local water,” encourages Minerich. “Rent paddleboards, kayaks, or a canoe; go fishing, or just enjoy some time on a beach. Experiencing how animals live along rivers and lakes is a great way to learn how valuable our aquatic resources are. From there, being a good steward of your watershed takes many forms like limiting runoff from your property by installing rain barrels, picking up pet waste, applying appropriate amounts of fertilizer and de-icing salts, and keeping your local storm drain clear of debris.”