Just in time for International Cat Day, the Minnesota Zoo is excited to debut its latest addition to the Medtronic Minnesota Trail: a Canada lynx kitten.

The male lynx kitten was born at the Minnesota Zoo on May 12 (Mother’s Day), but has been spending the last few months behind the scenes being cared for by his mom. On Wednesday, the kitten took his first steps into the Lynx Habitat on the Medtronic Minnesota Trail. Today, he began exploring the habitat a bit more and could be seen climbing across tree limbs and checking out the habitat’s stream. Both the kitten and the mother lynx are doing well.

The Minnesota Zoo is now home to three Canada lynx – an adult male, female, and the new male kitten. Minnesota used to have the most lynx in the Great Lakes region. Numbers dropped to near zero in the 1980s. Only recently have we seen signs of recovery.

As the new lynx kitten continues to acclimate to his habitat, he will be visible more and more in the coming days and weeks. Be sure to stop by the Lynx Habitat on the Medtronic Minnesota Trail to see if he’s out exploring. 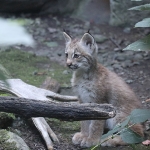 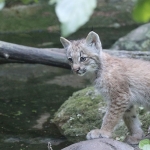