Few animals on earth are as captivating as the tiger. Their remarkably patterned coat and stealthy movements have caught our attention for decades. Unfortunately, as is often the case, too much human attention has meant catastrophe for global tiger populations. Tiger numbers have declined by more than 95% since the beginning of the 20th century. There are estimated to be fewer than 4,000 individuals alive in the wild. The illegal wildlife trade, human-wildlife conflict, habitat loss, and loss of prey have combined to push tigers to the brink of extinction. On this International Tiger Day, when our connection to the natural world is more important than ever, we invite you to learn more about these magnificent animals and take action to become part of the solution! 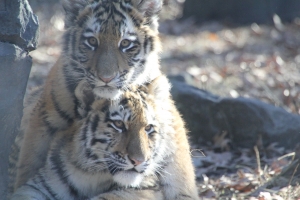 Panthera tigris
There are eight recognized subspecies of Panthera tigris, ranging throughout disjointed regions of China, Russia, southeast Asia, and India and the Himalayan region. Tigers once roamed throughout much of Asia but now are only found on 7% of their historical range. Tigers can be found in a range of habitats, including grasslands, lowland evergreen forests, mangrove swamps, and dry woodlands. They are an adaptable species, tolerating heat and humidity as well as extreme cold and heavy snowfall. Coloring, patterning, and body size vary considerably between subspecies. The Amur tiger (P. tigris altaica) is the largest subspecies, with males weighing in at more than 900 pounds. Tigers are formidable predators. With their broad shoulders, massive forelegs, and powerful jaw, they are well-suited to take down prey of all shapes and sizes. Tigers do the majority of their hunting at night and stalk and ambush their prey rather than chase them over long distances. Unlike other cat species, tigers are excellent swimmers and frequently cross rivers and lakes.

Tigers are mainly solitary animals, coming together to mate or while competing for resources. A female will give birth to one to seven cubs who are blind and helpless upon birth. Cubs will stay with their mother until they are between 18 months and 3 years of age, learning key hunting skills from their mother during this time. A mother with cubs must increase the amount of prey she catches by 50% in order to feed her growing offspring. Male tigers do not provide parental care. In the wild, tigers typically live 8-10 years. In captivity, they can occasionally live into their 20’s, although the average lifespan is 16-18 years of age.

A tiger’s role
Tigers are important players in stabilizing ecosystems. They are top predators, helping to keep prey species from overpopulating. Many of these prey species such as deer and other ungulates graze extensively on vegetation and without the presence of predators can harm the landscape.

Many local communities that live in proximity to tiger populations rely on healthy lands and waters for a living. By protecting tiger habitat we are also protecting resources that humans and other animals rely on. Tigers, as do other top predators, help maintain a balance and order to the natural world- a balance that can quickly shift when keystone species like tigers are no longer present. 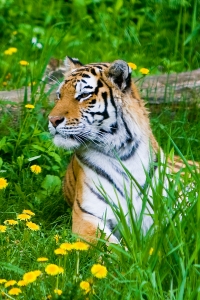 Conservation status
Tigers are listed globally as endangered with some subspecies listed as critically endangered. Tiger numbers have dropped dramatically over the last century due to a variety of factors including persecution by humans, habitat loss and fragmentation, and declines in prey. There are estimated to be fewer than 4,000 individuals remaining in the wild.

In 2010, the 13 “tiger range countries” came together and pledged to double the world’s tiger population by 2022, the next Year of the Tiger on the Asian lunar calendar, with a goal of reaching at least 6,000 tigers. Due to conservation efforts including habitat and legal protections, tiger populations appear to be increasing in some places. However, local populations remain vulnerable and much work is needed to secure a future for these animals.

Tiger Conservation Campaign
The Minnesota Zoo has been intimately involved in tiger conservation for decades. As it became clear that tiger populations in the wild were declining and threatened with extinction, conservation efforts within zoos and other institutions began, including coordination of cooperative breeding and the creation of a species survival plan (SSP). This type of program aims to oversee the population management of a certain species or group of animals and participate in field conservation efforts. In 2012, the tiger SSP created the Tiger Conservation Campaign. Minnesota Zoo staff are proud to co-host this campaign which focuses on the conservation of Amur, Sumatran, and Malayan tiger populations. In partnership with the Wildlife Conservation Society, these projects work to get at the heart of the crisis and support and involve local communities in the process.

Take action
There are ways you can help support the conservation of tigers, even if their habitat is far from your home. Here are some ways you can get involved:

Join us in raising awareness of these truly majestic animals and creating a unified voice for the conservation of tigers! Together we can make every day International Tiger Day.