Up until Memorial Day weekend you have the opportunity to help save Asian wild horses when you visit the Minnesota Zoo.  This species went completely extinct in the wild in the 1960’s.  In 1990, the Zoo contributed a stallion to conservation breeding efforts to help restore Asian wild horses back into the wild grassland steppes of Mongolia.  Read more below about the experience of a retired zookeeper who accompanied the horse on that journey.  The Minnesota Zoo is currently collecting donations at the entrance to support conservation work by Zoo biologists.  Learn more about our efforts to help the remaining 500 horses at www.truewildhorse.org. 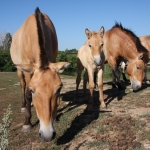 Seldom does one individual or even one organization claim to have solely contributed to saving an endangered species.  It takes a multitude of individuals, organizations and even circumstances working together, over a very long period of time, to form an intricate web of contributors to achieve a common goal.  I was fortunate to be in a position working for an institution and with several organizations that each played their part in working toward such a lofty goal, the reintroduction of an endangered species into its natural habitat.  Mine was a small part, yet I was a part of something much greater than many can imagine.

I started working for the Minnesota Zoo in the winter of 1978 and was assigned to the Northern Trail area.  Each zookeeper was assigned to a species for their primary focus and my assignment was Asian wild horses and Bactrian camels.  The Asian wild horses, also called Prezwalski horses (Phorses for short) were endangered, extinct in the wild, preserved in captivity, and not a particularly popular exhibit animal in zoos.  Quite different from elegant show horses or even the feral mustang, the Phorse looked like it had been scraped from a prehistoric cave painting.  And that was its beauty; it had changed little over thousands of years and was a living example of a time we could only read about in history books.

The Minnesota Zoo was one of the few places that not only committed to exhibiting this species but to do so in breeding herds.  Our breeding success was well known and we had a surplus of males.  Our breeding program was based on the International Species Inventory System (I.S.I.S.) to breed for genetic diversity. 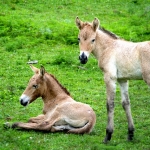 Half-way around the world a retired Dutch businessman, Jan Bauman, and his wife decided to spend their “golden years” doing something significant and meaningful.  They formed an organization called The International Association for the Preservation and Protection of the Prezwalski Horse, (I.A.P.P.P.H.).  It must have lost some of its poetry in the translation.  As a private organization they had amassed five semi-preserves in the Netherlands and Germany housing herds of Phorses to someday be reintroduced to their natural habitat in Mongolia.

They had contacted the Minnesota Zoo and arrangements were made to donate, and transfer at zoo expense, a young genetically desirable male called, Amaraa.  I was asked to accompany the animal throughout its flight to Europe.  Amaraa ended up becoming a significant contributor to their breeding program and, as I understand it, his offspring now roam the ancient habitat of his ancestors.  The species had gone full circle.  Extinct in the wild, preserved by zoos, selectively bred with the help of computers, reintroduced by a retired couple who wanted to make a difference, and all along the way silently supported by people who wanted to do something significant, something bigger than themselves.  People just like you and me.  Each one dedicated to an unseen goal, doing a little or a lot to achieve that goal but working together for the betterment of the world we live in.

Don’t let these unique horses vanish and become only memories. 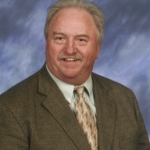