Giving the Shirt Off Your Back

Protecting black rhinos is a difficult and dangerous job. As if confronting charging rhinos and potentially heavily armed poachers is not enough of a burden, one lesser presented danger while on rhino patrol are the various other animals that roam the African bush, including spitting cobras, scorpions, lions, and leopards. 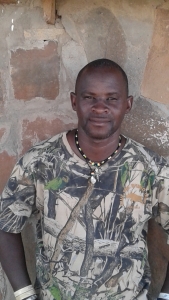 Remaining vigilant is important, especially for teams operating on foot. North-west Namibia is one of the most rugged and remote wilderness areas in Africa. Reaching any medical facility for treatment can take days and even simple calls for help often require our trackers to climb mountains to get a radio or cell phone signal. Thus, trackers need to be prepared and clever in dealing with any emergency they confront.

Recently, one of the tracking teams was being ‘tracked’ by a large, hungry male lion. The recent drought has decimated their normal food and lions are now getting desperate for nourishment. Lesley, one of the Rhino Rangers on patrol, was caught straying from the group with only a small bush between him and the lion. A stand-off ensued for 2 hours while the rest of the team watched helplessly from a nearby ridge. Finally, as the lion approached to within 50 feet, Lesley resorted to lighting the bush on fire using his own t-shirt to start the flames! The lion eventually moved off. But the tracker had to finish the patrol with no shirt… Now that is what we call dedication!

A huge thanks to all the rangers who make numerous sacrifices to safeguard the world’s wildlife! Happy World Ranger Day!