Frozen in Time – Overwintering Caterpillars at the Minnesota Zoo

Did you know that many species of insects survive Minnesota winters by “hibernating” throughout the cold months? While some insects, such as the monarch butterfly, choose to migrate south for winter, others stay put and enter into diapause, a process whereby the insect’s metabolism slows and development stops and it enters a sleep-like state – virtually frozen in time. As the weather warms in spring these overwintering insects then awaken and emerge. 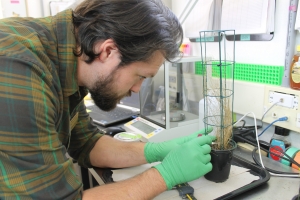 Here at the Minnesota Zoo, the Prairie Butterfly Conservation team is hard at work helping critically endangered Poweshiek skipperling caterpillars enter into diapause so they can survive the winter months. This past November, every Poweshiek caterpillar was individually transferred by hand into diapause chambers where they will wait out the cold. As caterpillars averaging a mere 9 milligrams and measuring ¾ of a centimeter, they can survive months at subzero temperatures and emerge in the spring to continue their incredible transformation into butterflies. And no down jackets or long underwear for these hardy creatures! “They survive by producing anti-freeze in their blood that prevent ice crystals from forming and shredding their tiny bodies. They are the true hardcore Midwesterners,” says Minnesota Zoo’s Butterfly Conservationist Cale Nordmeyer. While the Poweshiek skipperling is one of the smaller animal species here at the Minnesota Zoo, they are certainly among the toughest. 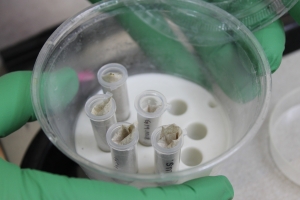 Each individual caterpillar is measured, weighed, and placed in a tube where it will safely overwinter. These cups are put in a controlled freezer to mimic the conditions the caterpillars would experience in the wild.

Once one of the most common prairie butterfly species in Minnesota, the Poweshiek skipperling is now among the most endangered animals in the world, with fewer than 500 adults thought to remain in the wild. “For reference, there are six times as many panda bears in the wild as there are Poweshiek skipperlings,” notes Nordmeyer. Ensuring the survival of these caterpillars throughout the winter months is crucial to the success of their wild population. In early July of next year, these caterpillars-turned-butterflies will be released back into the wild, making up an estimated 15% of all animals left in the world. The Minnesota Zoo and Assiniboine Park Zoo in Winnipeg, with support from many other partners, are the only institutions in the world rearing Poweshiek skipperlings. And while the future of this prairie butterfly is uncertain, researchers are hopeful that continued rearing and release of butterflies, along with habitat conservation and public support, will help the wild populations increase and remain viable for generations to come.

By visiting the Minnesota Zoo and becoming a member you are contributing to the success of important work such as the Prairie Butterfly Conservation Project. You can read here to learn more about this project and what you can do to help. And thank you for your support of endangered animals across the world!