Freshwater mussels are some of the most at-risk animals in the world. In North America, a mussel biodiversity hotspot, three quarters of the 300+ species are imperiled and 35 species are already extinct. Freshwater mussels were historically harvested in unsustainable numbers for the pearl button industry and today they face additional threats, including dams along riverways, pollution, invasive species, and climate change. 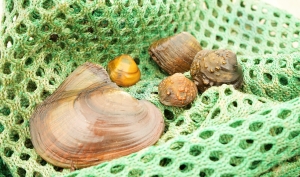 Biologists with the Minnesota Zoo and the Minnesota Department of Natural Resources (DNR) have partnered to help restore native mussel populations throughout the state. They are foundational ecosystem engineers that play an important role in water quality and health. They act as natural cleaners, filtering out pollutants, and help stabilize sediment and create conditions for many other aquatic species to thrive, and can help return water resources to healthy rivers.

“This work has been going for several years now and the number of mussels we are contributing to their projects has increased over time as we have built more sophisticated equipment to meet the rearing needs of some of Minnesota’s more challenging mussels,” notes Ben Minerich, conservation biologist with the Minnesota Zoo. “Collectively we are now raising baby mussels that will result in the eventual release of thousands of juveniles back into Minnesota rivers.” 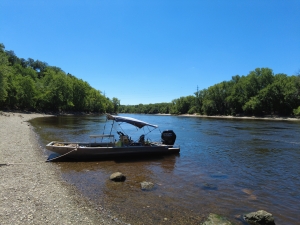 Mussel reintroduction along the Mississippi River.

This past July, Zoo and DNR biologists headed out to the Mississippi River with future river residents in tow. Over 2,700 native freshwater mussels, muckets and Higgins eye, were released into the waterway. Muckets, a state threatened species, and Higgins eye, federally listed as endangered, are both rarely found in the Mississippi River. The released individuals will continue to be monitored over the coming years to assess survival and population restoration.

“The hope is that when the DNR surveys this site over the next several years that they’ll find that not only have these mussels survived, but they are reproducing and their young are able to grow at this reintroduction site,” says Minerich. 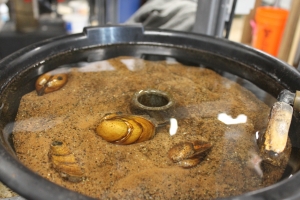 In addition to the releases, the rearing aspect of the mussel conservation program continues to grow. This past summer, hundreds of winged mapleleaf and thousands of spectaclecase mussels, both listed as federally endangered, were brought to the Zoo for rearing. Neither of these species have yet been successfully reared in captivity but this important ongoing effort by conservationists at the DNR and USGS has seen improvements in recent years. Researchers are hopeful that newly designed rearing systems and improved handling protocols will result in the first group of these species being raised to a large enough size for release.

You can learn more about freshwater mussels and the conservation efforts of the Minnesota Zoo by visiting our mussel restoration landing page.