In the Field: Peregrine Falcon Part 3

The Minnesota Zoo is well known for its 485 acre facility in Apple Valley, Minnesota – just minutes away from the Mall of America. However people may be less familiar with the amazing work the Zoo does outside of Minnesota. The Zoo’s Conservation Advisory Team and the Minnesota Zoo Foundation have been sending Zoo staff around the world for years with the Ulysses S. Seal Conservation Grant. This grant allows staff to help support conservation projects they are personally passionate about and even participate hands-on in the research, if possible. Since 2005, this grant program has supported six separate grants to the Midwest Peregrine Society. 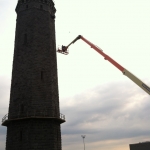 Today, June 11, the banding team headed north to St. Cloud to band chicks that are held in a box on the side of a tall tower at the Correctional Facility.  This was another unique situation where it took coordination with many people to access these chicks.  The only way to get to the box that holds the chicks is from the ground,  Zeigler donated staff (Mat Gertken) and equipment to lift us up to the box after we found the ladder on one of the city’s fire trucks was about 30 feet too short.  It wouldn’t have been possible to band the four, large female chicks without the help of Zeigler and the correctional facilities staff.  Thank you.

We then drove to the Mayo Clinic in Rochester to process three chicks in front of an audience.  Jackie brought her education bird, a male peregrine falcon, who fledged from a nest box in Winona, MN in 2012, and is missing portions of two digits from an impact with a building.  Due to his age and inexperience, with this injury, it was determined that he would not be a good candidate for release and is used extensively to help us educate people about the program and the success of this recovery program. 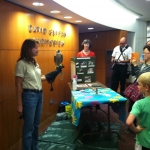 The Mayo clinic has participated in peregrine restoration since 1987, when we released 32 young captive bred birds from the Plummer building over a two year time period.  Since then, we have had a total of 78 young falcons fledge from this site, making it one of the more successful and older nesting territories in the Midwest.  This is also one site where the public is invited to observe the banding process and participate in choosing names of the young eyasses (nestlings).  With the several hundred people who attend, in addition to the thousands who watch the event in their hospital room, it can easily be said that Rochester loves their falcons!

You can read Part Two of my field research here.