This 4th of July, Minnesota Zoo staff were celebrating, but not just for the reason you might expect. An endangered prairie butterfly was seen breeding in the prairies of southwest Minnesota for the first time in almost a decade! Together, we made it happen! After years of work, the Minnesota Zoo’s Prairie Butterfly Conservation Program began the first ever reintroduction of the Dakota skipper back to Minnesota’s prairies this summer (see our June 28 blog post for more). The confirmation that these zoo-reared butterflies have now also reproduced in the wild is an enormous milestone worthy of its own fireworks! 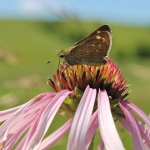 We began returning Dakota skippers to The Nature Conservancy’s beautiful Hole-in-the-Mountain Prairie Preserve (near Lake Benton, MN) on June 21, 2017. This quick orange and brown butterfly had darted between the Preserve’s purple coneflowers for millennia, but it disappeared suddenly in the late 2000s. Zoo staff released about 200 adult butterflies at the Preserve over a three week period this summer, all of which (as well as their parents and often grandparents) had been born and raised at the Minnesota Zoo. A key measure of success was to re-observe released adults to learn about their movements and habitat usage, so we were thrilled later find dozens of reintroduced individuals over the next month. Reintroducing and then re-sighting this endangered species are both of huge wins. 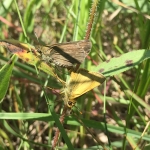 This year’s biggest goal was met on the 4th of July though: we observed two separate pairs of our reintroduced Dakota skippers mating near the release point AND also watched a third female lay an egg (which later hatched)! So, we can be certain that at least three matings occurred at the Hole-in-the-Mountain Prairie Preserve this summer. We assume that even more breeding occurred than we saw – the Preserve is a big place and usually only one Zoo staff member could be there every day for the month-long reintroduction and monitoring effort.

Dakota skippers were a common butterfly across Minnesota’s prairies for centuries. The re-establishment of this lost population to a large, healthy prairie is a first step to restoring more this amazing landscape. Creating and maintaining high quality prairie habitat for Dakota skippers will also help other amazing prairie wildlife like regal fritillaries, bobolinks, dickcissels, and prairie chickens.

You can celebrate with us, and help save Dakota skippers at the same time! While we are reintroducing this endangered prairie butterfly, the Minnesota Zoo is working again with Fair State Brewing Cooperative to reintroduce the prairie grass brewed Dakota Skipper Endangered Reserve. Available at Fair State and several other fine restaurants, sales of this #ButterflyBrew raises funds to directly help us reintroduce even more Dakota skippers in coming years. But hurry, this beer is as rare as the butterfly it is named for, and will only be available into August, or as long as supplies last! 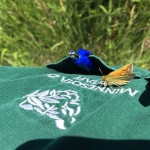 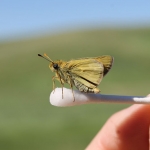 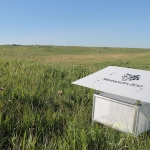 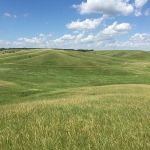 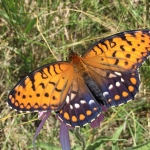 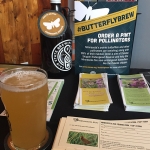