A “selfie-spot” is not the first thing that comes to mind when you think of the wild landscape of a National Park.  But we are in Khao Yai National Park, the first park established in Thailand in 1962 and being just 3 hours from Bangkok, it is extremely popular.  Think Yellowstone National Park.  Popularity, especially on a three day weekend, means thousands of tourists stream through the gates.  They all seem to stop at Sai Sorn Reservoir for group photos, selfie-photos, and even wedding photos with the brides gingerly picking their way through the tall grasses in heels for the perfect shot.

As tourists stream through the gates, they come in a wave of vehicles and despite warning signs, many drive too fast.  Unfortunately, wildlife struck by cars is a common occurrence.  No species is exempt from small leopard cats to pig-tailed macaques to elephants.  We are in Khao Yai National Park to study endangered dholes in the wild.  Our second week here we were called to the scene of a crime.  A male dhole was struck and killed by a motorcycle in the park (the driver got away with a fractured leg).  We are always grateful when someone reports a dhole sighting, but this was obviously terrible news.  Dholes are elusive and rarely seen by scientists in the Thailand forests.  We were able to access the dhole’s body to collect tick and parasites (useful data for a dhole disease study) and veterinary students were able to practice their necropsy (animal autopsy) skills.

No one wants to see animals killed by vehicles, but given that this happens often with deer in the park, we were able to use a road-kill barking deer (a natural food for dholes) as bait.  How could we not catch dholes?

And sure enough, our first dhole was caught just two days after putting out the barking deer body.  (Check out the photos below!)  We were able to put a GPS tracking collar on the female dhole, “Faan,” which will let us track her pack’s movements and the area they use in the park.  To learn more about what we do when we have a captured dhole, read Kate’s next blog.

Dr. Kate Jenks is a Conservation Biologist at the Minnesota Zoo.  She was recently in Thailand leading the Zoo’s efforts to save endangered dholes.  This work was initiated by Khao Yai National Park under the Thailand Department of National Parks, Plants, and Wildlife supported by the Minnesota Zoo, Smithsonian Conservation Biology Institute, Kasesart University in Bangkok, and the Zoological Park Organization of Thailand.  We have an incredible team of vets, scientists, and park research staff that are working to successfully place GPS tracking collars on dholes. 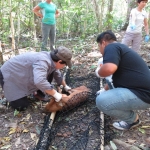 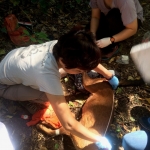 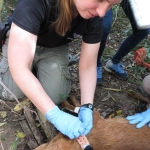