“Demon Tigers” vs. “Good Tigers” in a South Aceh Village

The thought of losing a loved one to a tiger is so difficult and terrible to imagine.  Before coming to Sumatra’s Aceh Province, I had read or heard about people being killed by wild tigers.  But meeting someone who has experienced that kind of loss in their family is something altogether different.   I find myself deeply affected by the story of Musir, a member of WCS-Indonesia’s Wildlife Response Unit in Aceh Province, Sumatra.

Coming home alone late one night in 2010, Musir’s brother was attacked and killed by a tiger.  Musir tells me that he hated the tiger.  But instead of turning against the tiger, Musir decided to help.

Above all else, Musir wanted to make sure that no one else would suffer the same fate as his brother.  He saw the strategies that the Wildlife Response Units employed in his village to protect people and livestock, and monitor nearby tigers.  So in 2011, Musir began volunteering for the Wildlife Response Units, and was hired as a team member the following year.  Now when there are problems with tigers coming close to the village, Musir is called home to repel the tiger back into the forest.

During my visit to south Aceh, I learned that in this part of island, people believe in two types of tiger:  the “demon tiger” (dayah tiger) and the “good tiger”.  The demon tiger is believed to be evil, creating conflicts in every village it has crossed, by consuming livestock, attacking people, or being seen nearby.  But the communities also believe that the good tiger will protect their villages by warning them about the demon tiger.  The good tiger signals that the demon tiger is coming by scratching a tree, scraping the ground, or roaring in the night.  Acehnese believe that the tiger is their ancestor, so they try to protect and not harm the tiger.

The demon tiger has been kept at bay in Musir’s village since that terrible night in 2010.  No people or livestock have been killed here since then.  Musir now spends his time on the side of the good tiger, working with the other Wildlife Response Team members to help protect villages around the region.  Their work has also dramatically improved the outlook for Sumatran tigers in this area.

As we walk through the forest, looking for signs of tigers, Musir is proudly wearing a tiger t-shirt that he chose from a stack of shirts I brought from Tiger Conservation Campaign supporters in the United States.   I can’t help but be amazed and deeply moved by his personal journey.  By sharing his story, I hope that it will inspire others the way it has inspired me.

Learn more about the Wildlife Response Units’ efforts to reduce tiger-human conflict in Sumatra, and lend your support: www.tigercampaign.org. 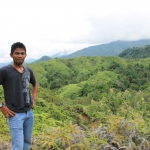 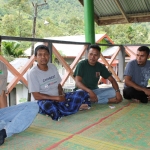 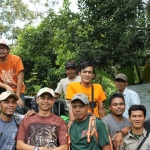 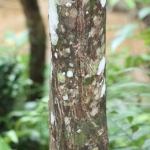