Critical Season to Save Endangered Butterflies

It’s likely that you have never seen, or maybe even heard of, two of Minnesota’s vanishing wildlife species. Small in size and increasingly less easy to find, it’s understandable why. Both the Dakota skipper (Hesperia dacotae) and the Poweshiek skipperling (Oarisma poweshiek) were once fairly common and widespread across western and southern Minnesota. But these butterflies rely on prairie habitat, and as Minnesota lost 99% percent of its native tallgrass prairie, mostly to agriculture, many animals were lost with it. 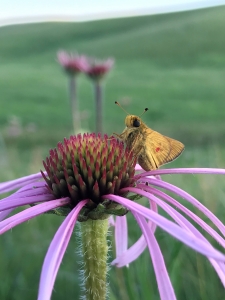 Over the last decade, the Minnesota Zoo has been working with  dozens of partner agencies to help save these species from extinction. The Prairie Butterfly Conservation Program now rears several thousand individuals of these Endangered butterflies each year. The goal of the breeding and rearing program is to keep these species from going extinct by releasing many individuals back into the prairie to help bolster wild populations and to keep diverse genetics alive through the breeding program as an “insurance” population, should their numbers in the wild plummet even further.

This past summer, Minnesota Zoo conservation biologists released a record number of Dakota skipper into the Hole-in-the-Mountain Prairie Preserve in Minnesota. Over 2,200 individuals were released, with over 1,000 of those as adult butterflies. As recently as 2009, Dakota skippers were reliable found during surveys at this Preserve. By 2012 though, Dakota skippers had seemingly blinked out at this Preserve and across southern Minnesota. It is unclear exactly why they experienced such a dramatic and sudden decline. The reintroduction efforts here are still relatively new, and researchers aren’t sure if the populations are self-sustaining yet.

“Typically, in the wild, for insects, only 1-2% or so of the young will live to adulthood. This is why a single individual produces hundreds of eggs, so that hopefully some will survive long enough to breed and keep the population going,” explains Dr. Erik Runquist, Conservation Biologist with the Minnesota Zoo. “This is also why using our facilities at the Zoo to produce thousands more individuals each year and then release them is a key step to hopefully bring populations back. We are also studying the conditions needed to maintain healthy wild populations.” 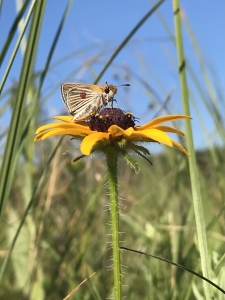 Efforts are expanding for the endangered Poweshiek skipperling as well. Over 100 adult butterflies were released at sites in Michigan where the last known wild populations remain in the U.S. And while this program continues to grow with increasing capacity to rear and breed these animals, the situation in the wild is looking more uncertain than ever.

“We already knew the situation was dire,” explains Cale Nordmeyer, Conservation Biologist with the Zoo. “But we never expected them to decline as much as they did over the past year.”

During field surveys in Michigan this past summer, an average of only 3 butterflies per day were spotted. This in contrast to last year when it wasn’t uncommon to spot over 20 individuals in a single day, and to ten years ago when you could see 200 in a day in a small area. This decline is concerning, to say the least. 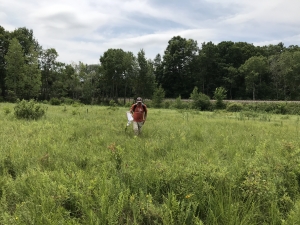 “It appears that in the U.S., Poweshiek skipperling are functionally extinct in the wild,” expresses Nordmeyer with evident concern.

Zoo researchers will continue to work closely with partnering agencies such as the John Ball Zoo in Michigan to reassess the needs of this species and continue the robust Zoo-based breeding program. While the future remains uncertain for the Poweshiek skipperling, hope remains that one day, these magnificent little butterflies will grace our Minnesota landscape once again.

To read more about this program and ways you can help, visit the Prairie Butterfly Conservation landing page.